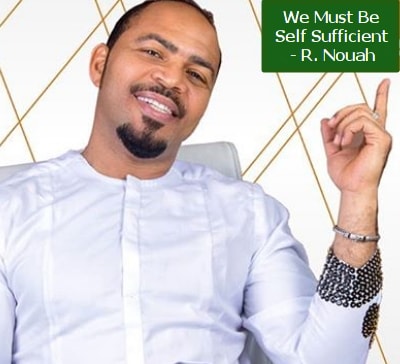 In a recent chat with The Weekender, ‘Crazy People of Lagos’ star, Ramsey Nouah talks about his career and his secret ambition.

Enjoy the interesting interview below:

Which project are you currently working on?

I have a movie that I am working on with a colleague of mine. It is a very big movie. He is actually a business partner of mine; his name is Charles Okpalaeke. We got together and secured the license to actually remake ‘Living in Bondage’.

Are you using the original cast?

I am part of the movie. We also have Steve Gukas; he is coming in as a producer and director. Basically, we are looking at a blockbuster of a movie.

What do you have to say about Kunle Afolayan?

Kunle is the forerunner or the guy that started turning around the outlook of Nollywood movies. He was one of those people that actually started making films and giving it a look of proper filmmaking. Going into the details of cinematography, Kunle gave birth to it. He is like my dude, and because of that, the very first time we talked was when we were working on our first movie together, which was ‘Figurine’. We talked about it but he said that I shouldn’t worry, that the rating is going to be over the top. Unfortunately, we suffered some serious setbacks and he couldn’t finish his script. However, the film still came out real good.

I watched the movie and noticed that there was no kind of language twist between you and the fake Ramsey. I was expecting the fake Ramsey to have a different way of talking, but it was almost the same. So, why is that?

Unfortunately, we are having all these grey areas because we didn’t finish the movie. Like I rightly said, the guy is supposed to be Ramsey Nouah. So, for the viewers, he is supposed to be Ramsey Nouah with all his mannerisms. If he has a different accent then you will know, and the thriller that the director is trying to create won’t be there anymore.

Earlier you mentioned that some fans accused you of swindling them. Did you make any report?

No, I have not made any report as regards that. Sometimes that got all nasty, with someone saying that I took their money and they would make me feel bad. Don’t blame me; blame social media. We tell the fans that before they do anything, they should do their findings.

Don’t you think some celebrities are causing this problem?

No, not in anyway. Whether you like it or not, the celebrities deserve it. Yes, it is true they have fans and the fans love them, but you can be at their every beck and call. For instance, they have their families, brothers, sisters, wives, and children. So how much attention are they going to give all of them? It is almost impossible. There are moments when they suffer a bit of setbacks. That they are celebrities does not mean that they can’t fall sick, or their children can’t fall sick. A lot of people don’t know what they go through. I remember the day my son had a major attack and I had to rush him to the emergency. Going out to get something, I met a woman with her kids saying, ‘hello Ramsey Nouah, let’s take a picture’. And I said, ‘I’m sorry I can’t do that right now’. She did not understand what I was going through; perhaps she did not see me coming in with my son.

Are you satisfied with the crop of actors we have in the industry now?

Like I said, a whole lot of them are not passionate. Sometimes, I don’t blame them. We have the social media platform, and the film platform. And they are trying to use every part of it to become famous. Doing the little jobs is not paying and it is not showing on their status. Nigerians now look at people by what you are wearing, the car you are driving, where you live and all of that to judge you. They know this, and it is affecting them a whole lot. That is why you see them always in several jobs, and in the process, passion is deserted in their performances.

What would you like to change in the industry?

Just like in the music industry, the artiste gets little and the promoter takes all. While in the movie industry, the actors get little despite being the ones that bring in much. Yet there are expectations from the movie audiences. I am a film director and producer, when I bring in a new actor; basically it is free so that you can get acknowledged. When you are now in demand, it helps me as a producer, because whatever movie I make with you becomes successful. If you are a new face, you know definitely you have to make some sacrifice. You will get paid but may not earn more than someone who is already known, a star that has a huge fan base. So, with the star, you get more cinema-goers compared to new faces. However, this does not mean that structures should not be put in place for things to be properly done.

For instance, if I cast a young, up and coming actor and I’m not giving him any money upfront; all what I give him is like a back-end royalty and the movie makes some money; the guy can still get some royalty even after the back-end. But there is no structure for that yet.

Do you think it is good for producers to over-hype the gross earnings of their movies in cinemas?

Honestly, I don’t know. I think it is a marketing gimmick. It is some strategy to make people think; ‘hey if it was that successful, why don’t I go and see it than seeing the next movie?’

If you were to begin your life all over again, what would you do differently, your secret wish?
I would be a pilot.

Really, why is that?

Everyone thinks the life of an actor is rosy. Unfortunately, it is not. The truth of the matter is that ‘uneasy lies the head that wears the crown’. It’s what we see all the time; you think it is love and everyone is showing love. Do you want to reciprocate love without having any breather or any moment to enjoy your own life?

Pilots do live a glamorous life…

I doubt it. How often do you see a pilot when you are going into the plane? (Laughter).

In all honesty, I don’t know. But if it happens, I’d be glad. My pitch to the people out there is that, we should first believe in ourselves and believe in Nigerian films so that it can get better. We can be dependent on ourselves without any foreign hands. That is how Bollywood is and they are extremely big. They are so big that Bollywood actors are more paid than Hollywood actors. If it can happen there (Bollywood) why do we think we have to go and act in Hollywood just to be successful? I don’t believe that. We are self-sufficient; if we believe in ourselves and make it work, then we will do our own thing and make it happen.

Tonto Dikeh To Fans: Sex Isn’t A Christian Or Muslim Thing, It Is Not A Sin When You’re Married
Mercy Johnson Develops Neck Scar After Thyroid Removal Surgery In The US