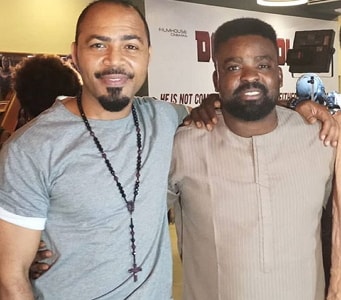 Nollywood actor Ramsey Nouah has urged his supporters to go and watch  his latest movie, Crazy People at the cinema.

Nouah likens the lessons that would be learned from the film to the appeal of abstract painting.

“It’s like a work of art. Of course, there’s always a message in the end, but some directors are just abstract. And for this, there’s so many lessons to take home, I just don’t want to let the cat out of the bag. I want you all to go see it, and let me know what they think about the movie.”

The actor challenged himself by playing multiple characters. He said his role in the movie is like a re-enactment of his role in the classic Tade Ogidan 2004 film, Dangerous Twins,” which also had him play a dual character.

Working on set of “Crazy People” was a smooth sail for Nouah.

“I was working with Moses Inwang, who, naturally, isn’t normal. He is a funny chap. Everything is funny to him, he cracks up all the time, and we had a lot of fun just being a set.

I can’t recall any day of too much pressure on set. I can’t remember. If there was, then it wasn’t strong.”