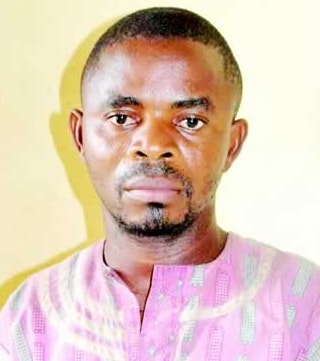 Niger State Police Command have arrested one God’stime Okon, for allegedly raping an 11-year-old girl at By-Water Area, Lambata in the Gurara Local Government Area of the state.

The victim was allegedly lured by the suspect to his room where he forcefully had carnal knowledge of her while warning her against informing anyone.

It was learnt that the incident occurred sometime on July 17 this year.

Northern City News gathered on Sunday that Okon had engaged in rape of minors for many years before he was apprehended.

The suspect told our correspondent that he was attracted to underage girls, saying he found it difficult to exercise self-control.

“It has become part of me; anytime I set my eyes on small beautiful girls, I got aroused and it has been affecting me adversely.

“Even If I am on a bike, I will stop and say hello to the girl before I continue on my way and it’s something I cannot control, honestly,” he said.

The suspect said that he did not regard it as a criminal act until he found himself in police custody.

Okon however regretted his action and begged the girl’s parents for forgiveness, promising to turn a new leaf.

The state Police Public Relations Officer, Muhammad Abubakar, said the suspect had confessed to the crime during interrogation.

Abubakar admonished parents to always know the whereabouts of their children especially girls to protect them from sexual predators.

He added that the suspect would be charged to court after investigation.

Girl Who Gave Birth After Being Raped By Father Rescued In Ogun State, Suspect Blames The Devil & Death Of Wife
Pregnant Grandma Arrested For Selling Grandchild For N200K Vows To Sell Own Baby After Birth