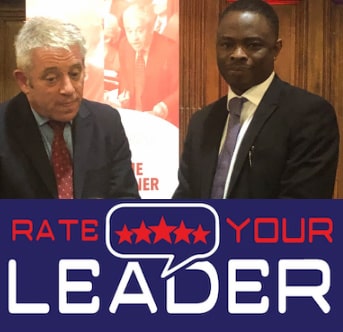 A Nigerian man identified as Joel Popoola has developed an app for Britons and Nigerians to rate their leaders.

The app named Rate  Your Leaders will enable voters in the UK and Nigeria to communicate with their elected representatives at the touch of a button.

The app designed by Joel Popoola, who had his childhood in Gbogan in Osun State, is programmed in such a way that communication on it cannot be abusive. The app can detect abuse and delete it. Day in, day out, more and more Members of Parliament, councillors, police and crime Commissioners are taking advantage of the app to communicate with their constituents.

The Rate Your Leader app is available for free from the Apple and Google marketplaces. With the platform, politicians can also engage with registered voters in their constituencies. Popoola, who is Rate Your Leader founder and Tyne and Wear tech entrepreneur, said: “Whoever wins the race to become the next Tory leader, and the next Prime Minister, has a real job on his hands reaching out to the electorate. Every one of the 12 current candidates is clearly taking that very seriously by putting themselves in the position to enter into a dialogue with voters on a one-on-one level.

“The fact that voters can use the Rate Your Leader app to do this means that this contest is arguably already the most accessible election ever.

“There is a wide and diverse field of candidates, but what unites them is the claim that they can reach out to parts of the electorate not currently voting Conservative. With a clear commitment to digital engagement, they are at least backing up that claim.”

Popoola’s motivation for developing the app is captured in these words: “Across the world, democracy is changing forever, and Nigeria is no different. Voters expect to have more influence on politics than our traditional representative democracy can necessarily accommodate.

As a result, voters are either defecting to anti-establishment parties or becoming more and more attracted by direct action.

“People’s political priorities and motivations are becoming more and more disparate and unpredictable, and politicians are clearly failing to ascertain what voters really want.” He believes the app will bridge the gap between politicians and the electorate.

Popoola had his primary and secondary education at the St Paul’s Anglican Primary School and Gbongan Community High School.

A British citizen of Nigerian descent, Popoola studied Accounting with a background in Banking, Finance and Insurance. He also holds a Masters degree holder in Managerial Psychology from the University of Ibadan.

Continue Reading
You may also like...
Related Topics:app, leader, rate, your