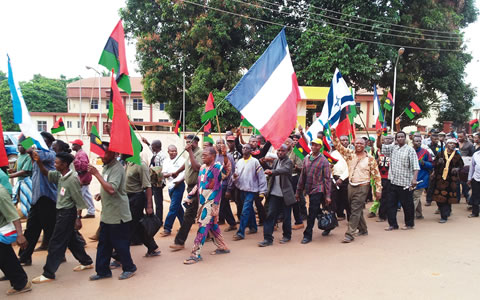 June 4th, 2014 – Republic Of Biafra: What Do The Igbos Want By Peregrino Brimah

The national conference has processed an extension. So far, many things have been deliberated during the ‘great conference,’ including state derivations, and of course the nature of Nigeria. Different participants selected by the Nigerian president who are meant to represent their constituencies have declared their positions on the various national issues. Of interest in this conversation is the desire for regionalism, region state-hood and true federalism.

What have we heard thus far from the conference? I seek my readers’ indulgence if I missed some things, but the one thing I am yet to hear from the national conference is the word, ‘Biafra.’ I have heard Oduduwa, in fact the Yoruba delegates were frank, brazen and deliberate on their position for the liberation of Oduduwa republic in Nigeria’s south west. Upon deliberation, they shifted their position, saying at the very least, they will accept true federalism and a Yoruba national region, no less. According to the Afenifere, “it is either Regional Autonomy or nothing.”

From a key player northerner delegate, the Lamido of Adamawa, Alhaji Muhammadu Barkindo Aliyu Musdafa, I have heard a firm demand on behalf of northerners he represents and northern leaders he says may not say so in public due to their compromised obligations to the president who invited them, of a quest for true federalism with as he put it, ‘100% resource control.’

But scouring the submissions of prominent Igbo leaders at the conference, I am yet to hear or read of a demand for an eastern region, true federalism with regional autonomy or Biafra republic.

I think we must be candid to solve the deadly problems of Nigeria. We all know that the representatives at the national conference are ‘friends’ of the president Mr. One Nigeria, however despite that the Yoruba ‘friends of the president,’ came out to declare what they want without compromise. Northern leaders did likewise. But what’s really up with the Igbo and South eastern delegates? We need to tell ourselves the truth. The Igbo youth who clamor for certain things and fire up the polity must address these issues with their state governors, regional senators and so-called leaders who represent them. It is time each individual in Nigeria takes up issues not simply by blaming and targeting the ‘other region,’ and the president, but looking inwards at the people who represent them at the community, state and regional level. Boko Haram is a shortcoming not only of Abuja but also of Borno.

Some of us are very apologetic for the happenings of the past. We apologize without reservation for the pogroms, for Biafra war. If we can pay money as restitution, an account should be opened to that effect and we will donate money to placate the victims for the atrocities we did not participate in, yet we accept responsibility for being citizens of Nigeria. If we can adopt orphans of the Biafran war, please let us know. But while these grievances are in order, the youth agitating for self determination should channel these requests in cordial manner through their leadership or elect to denounce and reject such leaders. How can people who wish for true federalism or state-hood support Mr. One Nigeria to the teeth? This is mischievously dishonest and threatens the intellect.

Nigeria is almost completely united in a desire to regain peace and progress and move forward. Nigerians and the entire world community are united in the rejection of the present grossly corrupt and dangerous leadership who have created the worst climate of terror, insecurity, hopelessness and corruption in the nation in its 50 year history. The world is ready to send the executive perpetrators to the Hague where they belong. But a handful of rather loud adherent supporters of Mr. One Nigeria who hail from Igbo land are the only individuals left who staunchly appear to support this failed, most corrupt, dead-spewing leadership, yet from the same mouth, claim they desire regional autonomy.

To my Igbo brothers, I say, which one you dey? The key to Biafra as a republic or an autonomous region is not in my hands, it is in the hands of your regional leaders, governors, senators and ultimately in the hands of President Goodluck Ebele Jonathan. Stand for what you believe in or don’t stand at all, but please stop delaying Nigeria as a nation or great regions/nations’ true quest for progress and definition. The northerners too who refuse to understand that the present equation simply leaves them as one of the poorest spots on the entire planet and the most terrorized of God’s creations, must also sit up and stand up to their leaders who have failed them beyond measure. This is the simple truth. It is time for mutual respect toward mutual and individual peace and progress.

Please forgive me for anything I have presented which may affect anyone’s sensibilities. I don’t see nations or tribes; I see people and people-nations. I am pro African Unity and less interested in how Nigeria is configured, and only interested in how peace, opportunity, equality, security, hope, global respect, sense and true sovereignty under God for one and all can return to all the people.

Continue Reading
You may also like...
Related Topics:biafra, igbo, republic