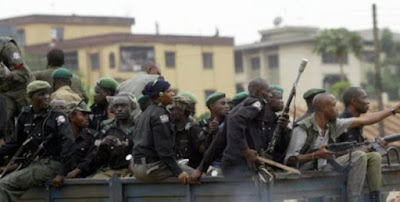 Feb 6, 2018 – Ritualist Snatches Day Old Baby From Mother In Abuja, Tells Her To Keep Calm That A Herbalist Sent Him

Police in Bwari area of Abuja today nabbed two suspects while attempting to steal a day-old-baby from the mother.

The Divisional Crime Officer (DCO) of Bwari Police station, SP Bumi Bulus, who confirmed the arrest, told News Agency of Nigeria (NAN) that investigation on the matter was still ongoing.

He, however, said that the main suspect (herbalist) was as at the time of filing this report still at large.

Mr Husseini Azana, a resident of kuduru community of Bwari Area Council in the FCT and father of the baby, told NAN that he nearly lost his baby to rituals.

Azana, told NAN on Tuesday that it was only through divine intervention of God that the child was not stolen, thanking the Nigeria Police for their swift response in arresting the suspects.

He said: “After my wife delivered on Monday a lot of people came to celebrate with us on Tuesday but while I was at my work station, I was called to come back home urgently.

“My wife then told me that there was a stranger, whom she said came to greet her and collected the baby from her hands while also asking her if she had powder to rub on the baby and she said no.

“Then he gave the baby back to her, went to a shop and bought a powder and attempted to rub on the baby but my wife stopped him and said she did not know him, why will he insisted on rubbing the powder.

“That was when she called me to come and identify the man and by then, the situation had drawn the attention of neighbours, who started questioning him and raising alarm.

“By the time I came, I and my neighbours put pressure on him, he then confessed that it was a nearby herbalist that asked him to come and carry the baby,’’ he said.

Azana added that he did not allow the mob to take the law into their hands, so he called the police who came and took the suspect away with one other that was found at the alleged herbalist shrine.

An eye witness, Alhaji Nurudeen Zubairu also told NAN that the incident shocked all of them in the neighbourhood.

According to him, when my attention was drawn, I called the father of the child on the phone to come back home urgently.

“We both went to the house to meet the man still standing in the room where the baby was.

“We had to drag him out of the room and asked him who sent him but he kept saying it was somebody.

“I told him he had no right to take someone’s child to another.

“The mother of the baby even told us that when she did not allow him carry the baby the second time, he waited for her to escort some of her visitors outside and he picked the baby again.

“She informed us that it was then she raised her voice asking him where he was taking her baby, he pushed her aside and asked her to keep calm that he was sent to bring the child.

“The thing is, I have heard so many times about the existence of some so called herbalist in this area but I have not seen them before, yet when the police arrived and arrested him, he was able to take us to the shrine.

“It was there the police picked another person,’’ he said.

Zubairu further said that the suspect was familiar to some of the people in the community.

He added that the matter was in the hands of the police and their statements when they reported at the Bwari Police station.(NAN)