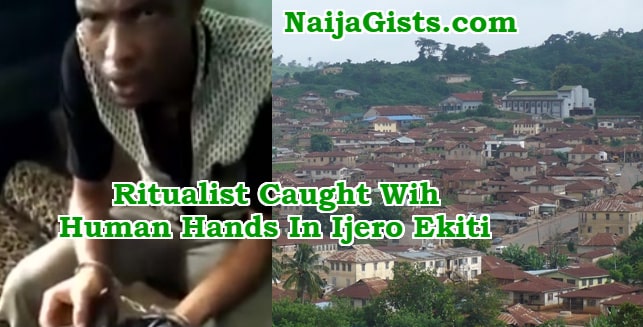 A man simply identified as Nifemi has been arrested with human parts in Ijero LGA of Ekiti state.

The 23-year-old suspect was nabbed by police during a stop and search operation this past Saturday.

According to a witness, the suspect was caught while heading to Okemesi Ekiti to sell the human parts to some suspected ritualists.

The source said the young man was said to have kept the human parts in a polythene bag and was apprehended along Ijero-Ikoro road while going to Okemesi to sell to customers.

“When quizzed by the police, the young man said he got the two hands at Asa farmstead near Okemesi and brought it to Ijero.

“He told the police that he wanted to take the human parts to Okemesi to go and sell to some people”.

Watch his confession video below