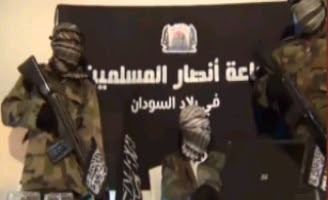 In an unedited email below, the group, a radical Islamic division of Boko Haram sect said Allah sent them to carry out the attack in order to free the terrorists detained in Abuja.

Details of their email below:

“ In the name of Allah most Graciuos most Merciful

“The Jama’atu Ansarul Muslimina Fi Biladis-sudan is hereby declaring by Allah’s grace to be the responsible for the attack held on 12th Muharram, 1334 – 26th November, 2012, on S.A.R.S.
detention facility in Garki area II, Abuja Nigeria.

“Allah SWT has obligated us to help those that are oppressed, especially those oppressions that is taking place in the security cells, prisons and other detention centers etc. and has become part of the main functions and basics that form Jama’atu Ansasrul Muslimina fi Biladissudan.

“we are stating loud and clear that many of those captured by the Nigerian security or by the Christian in Plateau state such as the women and children in Langtang, Yalwan Shandam etc to mention but a few. by Allah’s grace we are matching towards their freedom.

“lastly, we are calling upon all Muslims to come and joined hands with us in carrying out this noble duty that Allah SWT has commanded us to do, Allah SWT said: “And what is the matter with you that you fight not in the cause of ALLAH, and for the feeble among men, and for women and children oppressed…”. Nisa’i:75.
“Abu Usamatal Ansari (Amir JAMBS).”

According to research, this new Islamic sect were sponsored by top Nigerian Political leaders and other terrorism supporters in Saudi Arabia and Chad Republic who plan to Islamise Nigeria, a mission impossible.