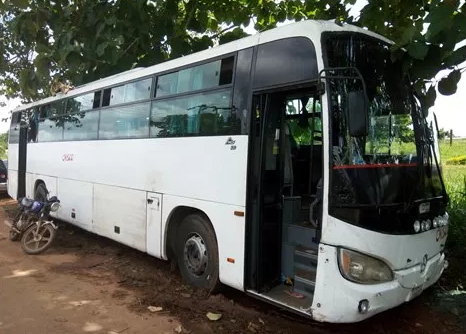 Police in Ogun State yesterday gunned down two highway robbers after a robbery attack on passengers of a luxury bus on the Sagamu-Ore-Benin Expressway.

The bandits, who were members of a deadly gang, had in the early hours hijacked a luxury bus belonging to Chisco Transport Company marked Lagos AAA 649 XN.

The vehicle, conveying 34 passengers, was attacked at Area J4 junction at Ogbere in Ijebu East Local Government Area on its way to Port Harcourt, Rivers State.

Some of the victims, who spoke with our correspondent, said the robbers chased them with a bus while another set barricaded the road.

They shattered the window, grounded the vehicle and began to ransack the terrified passengers.

The bandits, numbering about six, according to eye witnesses, drove the hijacked bus into the bush where they completed their two-hour raid.

Our correspondent, however, learnt that operatives of the Special Anti- Robbery Squad (SARS) attached to Ogbere-Ijebu divisional headquarters invaded the bandits’ hideout.

The robbers were allegedly trying to share their loots when the security agents, led by the Divisional Police Officer in charge of Ogbere, CSP Akingbade Adeyinka, arrived.

It was learnt that the police trailed the direction of torch which the robbers were using in the dead of night and opened fire.