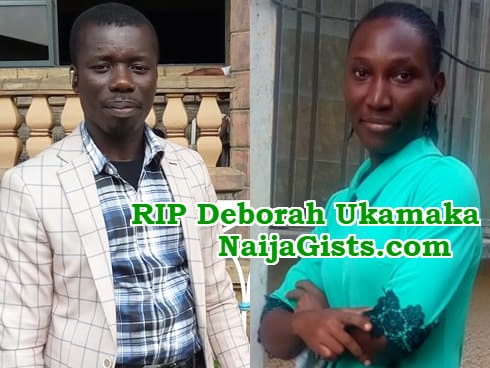 Last Saturday was a gloomy day as friends and family of Deborah Ukamaka Johnson (Nee Odoemelam) paid their last respect at her funeral in Lagos. There wasn’t a dry eye, as both old and young wept inconsolably, especially when they remembered the gruesome manner in which she died. Dorcas Egede reports

The pain of separation from a loved one is really hard to bear, but it’s harder when that loved one is young and harder still if they suffered a gruesome death. Deborah Ukamaka Johnson, a serving corps member in Lagos allegedly went, untimely, to her Maker in a most gruesome way at the hands of a man that pledged to love and cherish her for better or worse.

The news of Johnson’s untimely demise came to her family and friends as a rude shock. According to people who knew her well, she was full of life and very cheerful. While it is true that no one speaks evil of the dead, judging from posts on the deceased’s Facebook wall, she was a charming and sociable, calm and fun-loving person.

The deceased got married to her heartthrob, Akwa-Ibom State-born Godspower Johnson Itohowo in December of 2014 while still in school against the better judgment of her parents and siblings. Reports from her siblings have it that the marriage had been abusive right from the very start. The first sign that the marriage was a disaster, according to her elder sister, Chineye Adogah, reared its head when the deceased was asked to withdraw from Optometry at 500 Level.

Johnson had got married at 400 Level, but was surprisingly asked to withdraw from the department barely a year later because of low grades. The question therefore was if she had it going well till 400 Level, what changed in 500 Level?

After withdrawing from Optometry, she settled for Microbiology, which she successfully finished in 2018. Adogah however said, “That was how that boy made her spend 10 years in school. He first ruined her career, and then killed her. It’s very unfortunate. But she just loved that boy. Even on her dying bed, she said she had forgiven him for what he did to her and urged us to forgive and pray for him to change.”

One punch after another

According to her immediate elder sister, Chinonso Pope, she had had to go and take the late Johnson to her house on request from concerned neighbours who were worried by the amount of beating she was receiving from her husband, Godspower Johnson.

She recalled that Johnson had been abusing the deceased for long. There was a time, she said, when their neighbour called her to come and take her sister home, because her husband had thrown her out of the house, naked.

“On the 10th of March, he threw her things out and she ran to my place. After two days of staying at my place, her husband started calling her to return home.” She however refused until her in-laws joined in the plea – albeit, against her sister’s counsel.

Pope noted that this was the pattern. He would beat her up, send her packing, plead for forgiveness, and then she would return to him. Several attempts by her siblings to make her leave the place of abuse for good proved abortive, as she always insisted that he didn’t know what he was doing and would change. “Usually, I just asked her to run away or raise alarm if it came to her husband beating her again.” Pope said.

Too late to act

If only they knew it was going to end in fatality, they would definitely have been more proactive. Another older sibling of the deceased, Barrister Chineye Adogah expressed her regret, adding that the family was already planning to come down to Lagos for a meeting with the Johnson family, so they could discuss the way forward for the couple.

That wasn’t to be, however, as Johnson called Pope in the early hours of Thursday 21st of March to report that Deborah couldn’t raise her hands or legs or feel anything. “I ran there before 6:30am. We took her to Redeemer’s Hospital at Okoko (Lagos). They tried all they could. Midnight of Thursday, she couldn’t breathe; I called the doctor and they placed her on oxygen,” said Pope.

All the while, the only thing they knew about their sister’s condition was what her husband kept telling them. “He told me she had an attack in the middle of the night, which was why she couldn’t feel or move a limb,” Pope said.

Meanwhile, at the hospital, she noticed that her sister was trying to tell her something, but her husband’s presence in the room made it impossible for her to say anything. Having noticed this, Pope said, “On Friday, I made a lot of trouble with the husband and they (the hospital management) had to take him out of the room.” But that was not the end.

“In the presence of a nurse and the husband’s sister, Grace Mfon, Deborah told me what happened. According to her, her husband had wanted to mate with her on Wednesday night and she refused. There and then, he forcefully put his hand into her body (through her vagina) and pulled at her, causing her to hit her head against the couch in the process. By the time he left her, she noticed that she couldn’t raise her hands or move her limbs. When confronted, he admitted to inserting only two fingers into her. It was at that point that the nurse told the doctor that they couldn’t handle her case in their hospital and we were referred to LASUTH.

“When we got to LASUTH, they checked to see she wasn’t feeling anything, then they again referred us to the National Orthopedic Hospital, Igbobi. She couldn’t breathe well, as her lungs had collapsed, so she was always on oxygen. At Igbobi, it was discovered that she had a broken spine and multiple fractures on her neck. Some surgeries were immediately carried out on her. The night that she passed on, maybe there was no gas in the cylinder, she was gasping for breath. We got the doctor, but before they were able to rush her to the ICU, she gave up the ghost,” Pope finished between sobs.

Asked if there was any known reason the deceased’s husband kept beating her, Pope said, “He was jealous and suspicious, always accusing her of having extramarital affairs,” adding that he also was trying to force her to join him in his new church, Synagogue Church of All Nations, something she refused to do.

The deceased’s eldest sister, Eberechukwu Edeh, told Sunday Nation that “Deborah is not the kind or person that speaks out. When I learnt about it, it was from Chinonso who stays in Lagos (I live in Abuja). I called her and asked her how her marriage was; she told me that her husband beats her at will. I told her that marriage is not a do or die affair and that she should leave the man before he does something bad to her. But because of the kind of resilient spirit that she had (when she hasn’t made up her mind on something, she doesn’t act) she stayed with him.

“In fact, he threw her out recently stark naked. It was her neighbours that gave her a wrapper to cover herself and helped her to call our sister who lives nearby. When I asked what happened, he said that he was told in church that if his wife refused to come to church with him, it meant she was a witch. They were both members of Deeper Life Bible Church, in fact, they got married there, but he left the church for Synagogue Church of all Nations two years after they got wedded.”

Asked what effort the family made to help her leave the abusive relationship, Edeh said, “Deborah doesn’t talk. It was through Chinonso that I heard most of the things she was passing through. She even covered up for the man a whole lot. In fact, my parents were already planning to come to Lagos at Easter, so that both families could sit and discuss the issues. Unfortunately, the worse happened before the planned visit.

“I remember telling my mum that I’d rather they separated, but you know this thing about coming from a Christian background and believing that divorce is bad and people choose to stay in abusive marriages and keep patching things up. He was also accusing her of infidelity, but all his accusations were unfounded.

“Deborah has a very resilient spirit and she was a very gentle person, sociable, friendly and peace-loving. I carried her as a child, so I knew her very well. She is not the one to fight or make trouble with anybody.”

The obviously pained Edeh said, “Young women must not die in an abusive relationship. Nobody is worth dying for. Another thing young ladies must know is that marriage is not a competition; you don’t marry because your friends are getting married. I got married at 35 and I have no regrets at all.

On her part, Adogah said what she knew about the troubled marriage were things her younger sister, Chinomso told her. She said the deceased didn’t really confide in her because of her stance that she shouldn’t have married Johnson in the first place and that she should leave the marriage. She added that when she was told that the deceased was in a bad shape at the hospital, she rushed down to Lagos and started contacting colleagues, who told her about the Domestic and Sexual Violence Response Team (DSVRT) where she went to report the case. It was however too late.

The suspect has been charged to court for murder and is being remanded in prison.