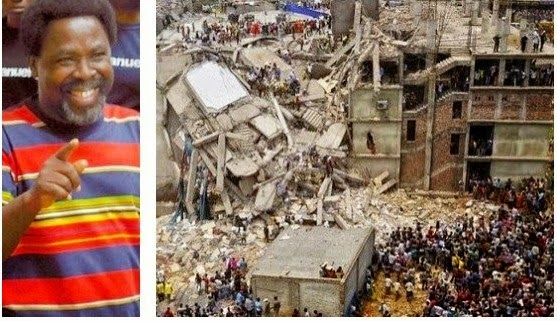 The Lagos State Government says the coroner it inaugurated to probe the circumstances surrounding the collapse of the six-storey building belonging to the Synagogue Church of All of Nations will commence sitting on October 13. Below is excerpt from the statement released by the Lagos State Ministry of Justice on Friday Oct 3.

Various print and electronic media houses such as The PUNCH, The Nation, Daily Independent, The Vanguard, P.M. News, the News Agency of Nigeria, Channels Television and Television Continental are also expected to testify before the coroner of inquest.

The General Overseer and founder of SCOAN, Pastor T. B. Joshua, families of the victims, an eyewitness, Lindiw Ndwande and the chairman of the Youth League’s International Relation Committee of South Africa, Mr. Rebone Tau, have also been listed as witnesses.

“Other members of the public who may have any information useful to the coroner and wish to give evidence or tender any material that will assist the court in its findings are also enjoined to indicate their interest by contacting the registrar at the Coroner’s Court, High Court premises, Ikeja, Lagos State between the hours of 8am and 4pm daily,” the statement said.