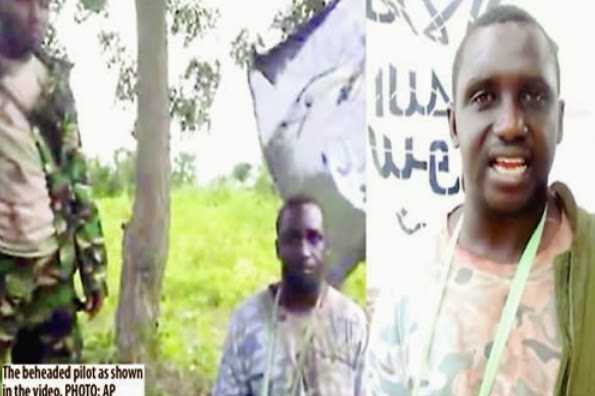 The wreckage of the Airforce Jet NAF 466 that was reported missing by the Nigerian military last month has been seen in a new video released by Boko Haram.

AP reported that the details of a new video sent to them on Friday revealed Boko Haram beheading one of the pilots in the missing plane.

The video also shows the wreckage of the missing plane.

The disturbing video displayed a man dressed in a camouflage vest kneeling down with his right hand in a sling with a Boko Haram terrorist hovering over him with an axe, which was later used to behead him.

Speaking in English, the victim identifies himself as a Wing Commander in the Nigerian Air Force and says he was undertaking a mission in Kauri area of northeast Borno state.

“We were shot down and our aircraft crashed,” “To this day I don’t know the whereabouts of my second pilot.”

The Nigerian military has described the beheading of the pilot as barbaric.

The military assured Nigerians that no level or amount of barbaric display of bestial atrocities would distract the Nigerian military from sustaining the tempo of ongoing operations to decimate, degrade and bring the remnants of the terrorists.

The Nigerian Army spokesman also urged Nigerians to hope and not despair.