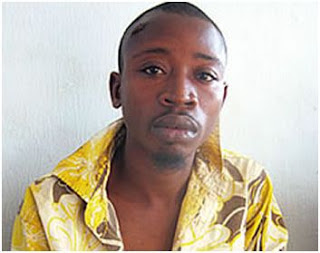 A lover boy has been arrested in Enugu for attacking a teacher.

The young man simply identified as Ebuka, a pupil at Community Secondary School Alor Uno, Nsukka gave a teacher a deep machete cut on the head for beating his rude girlfriend.

According to fellow students, the victim (teacher) simply known as Ike punished Ebuka’s girlfriend who misbehaved in class.

The suspect who was said to be under the influence of hard drug on the fateful day hid a machete in his cloth before beckoning on the teacher to come closer.

Sensing danger, the teacher ran away while the suspect chased him into a classroom where he stabbed him on the head.

The victim was rescued by other teachers and students who overpowered Ebuka and handed him over to the police.

The suspect who told police that a spirit came over him claims innocence. He said his girlfriend told him that a certain teacher beat her and he decided to retaliate.

The victim is currently receiving treatment at a private hospital in Enugu as lover boy languish in police detention.