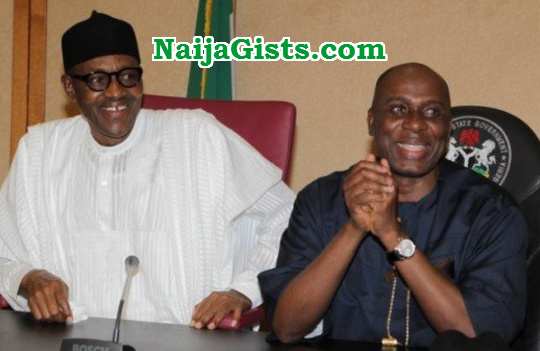 Rather than abate, the crisis over the screening of ministerial nominee Rotimi Chibuike Amaechi is deepening at the Senate.

Yesterday, his name was removed from the Order Paper after being listed among the eight nominees for screening.

The number was pruned to three – Adebayo Shittu (Oyo), Hajia Khadija Abba-Ibrahim (Yobe) and Claudius Daramola (Ondo), who was not on the first Order Paper.

Only Shittu and Hajia Abba-Ibrahim were, however, screened.

Amaechi, who is on the first list of 21 nominees sent to the Senate by President Muhammadu Buhari on September 30, has not been screened because of the petition filed against him by the self-styled The Integrity Group.

Amaechi has since denied the allegation against him and taken the matter to court.

The Senate yesterday suspended plenary today without stating reasons. But, it may not be unconnected with the resumption of Senate President Bukola Saraki’s trial before the Code of Conduct Tribunal (CCT) for alleged false assets declaration today.

The Senate Ethics, Privileges and Public Petitions Committee which considered the petition against Amaechi was set to submit its findings yesterday but the report’s submission was also deleted from the Order Paper.

Its Chairman Senator Samuel Anyanwu was listed to submit the report before the item, just like Amaechi’s name, was removed from the Order Paper.

No reasons were given for the removal. Efforts to find out why they were removed failed.

At the office of the Chairman, Senate Committee on Rules and Business, Senator Babajide Omoworare, nobody was ready to speak on the matter. An aide, after conferring with the lawmaker, told The Nation: “The time and terrain are too sensitive, so oga willnot say a word.”

But, it was learnt that “the leadership of the Senate decided to shift Amaechi’s screening to pave the way for constructive consultation with hardliner Senators, particularly of the Peoples Democratic Party (PDP).”

According to a source, the Senate leadership decided to shorten plenary to allow time for a meeting of the PDP caucus.

No member of the caucus spoke to reporters after the meeting but an insider said they were unable to resolve how to treat Amaechi’s case.

The source noted that while a few members of the caucus “wanted us to soft pedal and support the nomination of Amaechi, others were vehement that we should not back down on our stand .”

The caucus, he said, would still meet at the party headquarters on the issue.

Another source said it was wrong of the Senate to continue to delay Amaechi’s screening.

According to the source, if Amaechi is screened, the Senate has the right to confirm or reject his nomination.

He said: “Even though PDP senators are insisting that Amaechi should not be screened, it is better for us to screen the nominee and take a decision on him. I have it on good authority that most PDP Senators have vowed to stop Amaechi’s screening but at the end of the day, good conscience will prevail because we are talking to one another on this sensitive issue.”

At his screening, Shittu described the upper chamber as “the most productive Senate on the soil of Africa.”

The nominee said if he is confirmed he would do his best to ensure that the Executive and the National Assembly work in tandem for the country’s development.

He said: “If confirmed, I will be a round peg in any ministerial posting that I’m given.”

Shittu denied that he was indicted by a panel for religious intolerance in Oyo State, nothing that he was in Saudi Arabia when the incident occurred and couldn’t have had anything to do with it.

The panel that investigated the matter, he said, never invited him, adding that the list of those invited was gazetted.

The panel, he said, merely “advised him” to refrain from writing books that could inflame religious passion, adding: “It was only an advice and not an indictment.”

Shittu said the government had since pardoned all those indicted by the panel.

On why he lost his governorship election in 2011 on the Congress for progressive Change (CPC) platform, the nominee said he did not lose because of his personality.

He said he lost because “the whole of South West people decided to vote for the Action Congress of Nigeria (ACN).”

He said going to the ministry of culture and tourism would not be going to a foreign land because he had done it before.

The nominee said he was part of the people who crafted the APC manifesto, with the hope that if implemented, the country would have a new lease of life.

The students feeding programme of the APC if implemented, he said, would not only create jobs for Nigerians but would also attract many children to school.

The nominee noted that as a Muslim, his world view and aspiration were in line with what Islam teaches.

Shittu said he would never support coercing people to embrace any religion against their wish.

The nominee said even if Boko Haram insurgents lay claim to Islam, their activities have nothing whatsoever to do with Islam and denied that his publication, “Path to Paradice” is the sect’s guiding principle.

She said her last appointment before she joined active politics was as commissioner for Transport and Energy in Yobe State, adding that she was involved in the rural electrification programme in the 17 local government area of the state.

Asked by Saraki to take the first question, her husband, Senator Bukar Abba Ibrahim asked her how she would react if “I ask you to take a bow and go.”

There was general laughter in the chamber.

When the laughter subsided, Saraki asked the nominee to take a bow and go.

Senator Athanasius Achonu (Imo North) told the Senate that he has 10 petitions against the nomination of Professor Anthony Anwukah.

The petitions were referred to the ethics committee.

Anyanwu asked the Senate to give the committee time to treat the petitions since 10 petitions could not be treated in one day.

Sixteen other ministerial nominees are awaiting to be screened.