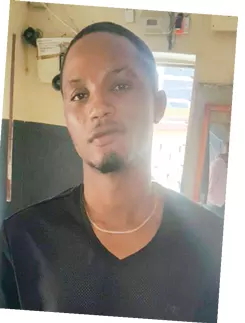 A 22-year-old man, who specialised in defrauding rich widows and divorcees through social media has been arrested by The Victoria Island Police Station. The suspect, Chinedu Iroko, a secondary school dropout was arrested after he defrauded a victim.

It was gathered that after he defrauded the woman, she reported to the police. The police went on Facebook to become friends with Iroko.

One of them acted as a widow and started chatting with Iroko until it got to the stage where he asked for money. He was asked to come for the money, when he got to the venue, he walked into the waiting arms of policemen. During investigation, police discovered that Iroko goes by many names, including Frank, Odinaka, Fine boy and Stanley.

“The suspect is a secondary school dropout, but he’s very skilled in the use of computer. He frequents Facebook and dating sites. His modus operandi is to go on these social media sites where he takes on the identity of a wealthy Igbo widower living in the United State of America.”

“The women I target are usually divorcees and widows; these women are desperate to have companions. I lied to them that I live in USA. I do this by posing as a wealthy widower. This widower is an Igbo man and I target Igbo women so that I can communicate with them in Igbo.

I’m can’t speak English language fluently.” According to the police, the suspect would post pictures on Facebook and dating sites, claiming to be searching for a wife.

He would go further to post pictures of expensive cars, houses, just to get attention of wealthy divorcees, and widows. The police added: “The suspect had obtained over N5 million from his victims, using these gimmicks. Luck, however, ran out on him after he duped the last victim.”

Further disclosing how he used to catch his victims and get money from them, Iroko said: “I calculated that I will not spend more than 10 days before I achieve my aim. So, what I do is to put pressure on the women, though subtly, so they would part with money. I go as far as introducing them to my fictitious family members. I go on to make series of demands.”

He added: “These women end up parting with the money, hoping that I would repay them. But after collecting the money, I block their phone numbers from calling me.

The least amount I have collected from victims is N300, 000. I have also collected up to N1.5milion. I don’t feel I have done anything wrong because I need money to survive” The suspect has been charged to the Igbosere Magistrate Court on charge of obtaining under false pretense.