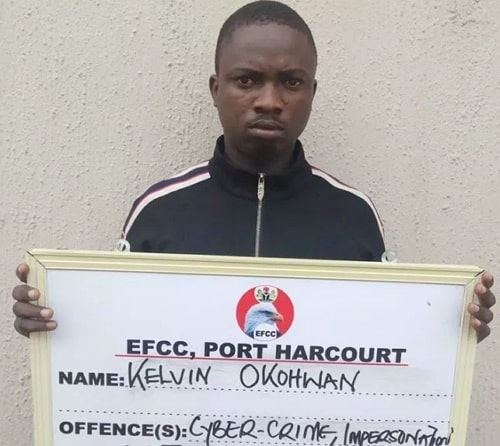 He was accused of hacking into 100 Facebook accounts of users.

The charge is contrary to Section 12 (1) of the Cybercrime (Prohibition Prevention e.t.c.) Act 2015 and punishable under same Section of the same Act.

“That you Okohwan Kelvin sometimes between January 2019 and February 2019 in Port Harcourt, Rivers State within the jurisdiction of this Honourable Court did unlawfully intercept by technical means the Facebook account of one Odili Charles with the intent to use if for fraudulent purposes and thereby committed an offence contrary to Section 12 (1) of the Cybercrime (Prohibition Prevention e.t.c.) Act 2015 and punishable under same Section of the same Act”.

The defendant pleaded not guilty to the one count charge when read to him.

In view of his plea, prosecution counsel, K.W. Chukwuma-Eneh, prayed the court to fix a date for the commencement of trial. Counsel to the defendant, P. Chukwu did not oppose the prayer of the prosecution.

Justice A.T. Mohammed remanded the defendant in prison custody and ordered that his case file be forwarded to the Presiding Judge of the Federal High Court for re-assignment.

Kelvin’s ordeal, followed his arrest by operatives of the EFCC after discreet monitoring of his online activities, based on complaints from members of the public alleging that he hacked and took over their Facebook accounts, by clicking on a phishing link he sent to them.

Investigations showed that Kelvin had hacked about one hundred Facebook accounts using phishing links generated from an online hacking website.

He was also accused of selling hacked Facebook accounts to other fraudsters who were using them for various nefarious online activities.