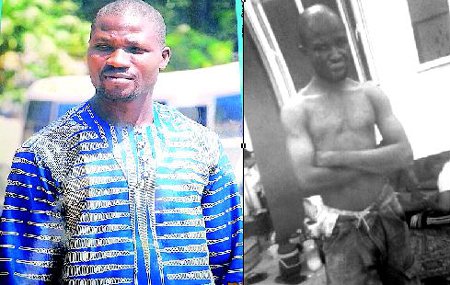 A girl identified as Abigail Olayiwola has begged police to kill the man who stabbed her dad to death on New Year’s Day.

The deceased, Stephen Olayiwole, a driver was stabbed to death with a broken bottle by his friend and a co-tenant, Mr Ibrahim Adetunji, during a quarrel in his 66, Lafunke Street, Ijegun, outskirts of Lagos home.

The Nation gathered that a quarrel broke out between the two friends when the victim was brokering peace between Adetunji’s wife and other tenants.

Adetunji was said to have got angry with the way Olayiwola was addressing his wife when mediating in the dispute.

An eyewitness said the incident happened at about noon.

A neighbour, Mr Sharafa Ogunbisi, said Stephen was first treated at a nearby hospital from where he was referred to the State University Teaching Hospital (LASUTH) in Ikeja due to excessive bleeding.

Ogunbisi said Stephen died on the way to the hospital and his body was deposited at the Isolo General Hospital mortuary.

Adetunji has been detained at Isheri-Oshun police station.

When The Nation visited the home of the deceased, Olayiwola’s widow, Abidemi, a tailor, was just returning from a holiday trip to Ekiti State with her three children.

Mrs Olayiwola and Abigail were weeping.

The widow thereafter was quiet, talking to no one.

Family members, friends and neighbours came to condole with the family.

“My daddy has always been responsible for our feeding, accommodation and education among others. He was a responsible man. He was a gentle man and he would never fight with any one; he would play and carry all the children that come around him.

“I would miss my daddy for everything. He is the one that is taking care of me, my mother and my younger ones; he pays our school fees and takes good care of us,”.

Ogunbisi narrated how the incident occurred: “On January 1, Olayiwola told Iya Fathia not to greet him again because she always fights with everyone. Iya Fathia held Olayiwola but he pushed her back and she fell. When Adetunji got back, his wife told him that Olayiwola beat her and it led to another quarrel. Adetunji later went to the police station to report. Though, Olayiwola did not beat her. All of us in the compound and other neighbours outside the compound came out and settled the quarrel. Olayiwola and about five of other men prostrated and the whole matter ended, even Adetunji said everything was over and we all went back to our apartments.

“The next thing we learnt was that Olayiwola was sleeping by the front of his apartment when an elderly woman called Iya Adura told him that he assaulted a husband and wife, Olayiwola said he did not.

Adetunji met them there; Olayiwola pushed him away that they should let him continue his sleep. The next thing was that Adetunji took a broken bottle and stabbed Olayiwola. Olayiwola ran out of the compound, Adetunji chased him and said he would kill him. While Olayiwola was on the motorcycle rushing to the hospital because he was bleeding, Adetunji was pulling him by the trouser. Adetunji did not allow anyone to come in between them; he was ready to stab anyone who tried to save Olayiwola from him.”

Ogunbisi explained that Adetunji and Olayiwola were good friends in the compound and even if Adetunji wanted to kill anyone, nobody would have though it would be Olayiwola, because of their closeness, adding: “They had never fought before; it is only Adetunji’s wife that is quarrelsome. There is no day she will not fight somebody; she would curse everybody, she has no job. Adetunji is an Okada rider and he is also a marketer with a wine firm. He is from Oyo State. They have three children and their last child clocked a year the day the incident happened. They moved into this compound about a year ago. Before they moved into this compound, there was peace here, no one ever fought with anyone, and we were always playing with one another.

“After the incident, we discovered that Adetunji had been a long time criminal, killing several people and had been to Kirikiri Prison three times. He had at one of the times spent three years in Kirikiri Prison. That was the first time we heard such about him, because he does not talk to anyone in this compound except Olayiwola. We learnt he had committed several offence before, and his coming here to rent an apartment was a hideout, which none of us was aware of. Even when we got to the police station, some of the police officers identified him as a criminal, saying he has been hiding in our apartment all the while. The police came here on Tuesday January 2) to search his house. ”

A neighbour who pleaded not to be named said many people identified Adetunji as a criminal but neighbours never knew that side of him.

She said Adetunji does not drink but he carries charms, saying that must have led him to do what he did.

“When the police came here on Tuesday, they found a living lizard, tied with three pieces of cloth moving round his room, they also found something like a black calabash with a stone inside.

“When Adetunji stabbed Olayiwola, residents put him on the bike, this man was pulling him by the waist, saying he must die. His daughter was in between them, telling his father not to kill the man but he did not listen. His wife was also there at the scene. While all of these were ongoing, Iya Adura, who instigated Adetunji to kill Olayiwola, told him not to allow Olayiwola to go free, else he will suffer for it. She said it loud on the street and everybody was surprised. Adetunji’s wife is a bad person, even the husband looks like a hired killer.

“The wife did not show any remorse seeing her husband killing someone neither did she feel any how when the news spread that Olayiwola was dead. She only called someone on the phone and said it had happened again, that her husband had killed someone. It is obvious that they are doing charms because we noticed that the man was always wearing one ring that has turned into black.

“There has never been robbery in this compound until when the Adetunjis joined us. His wife will always fight everyone in this compound every week. She instigates her husband to do evil,” she said.

Continue Reading
You may also like...
Related Topics:killer, kirikiri, serial