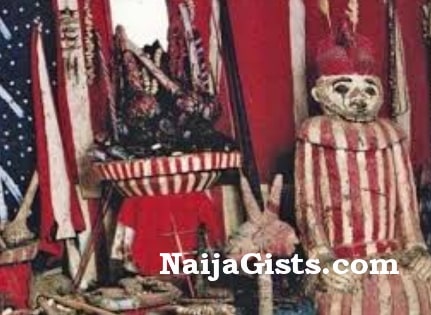 The Delta State Police command said the building stocked with charms, arms and ammunition in Utulu area of Aniocha North LGA of Delta state has been uncovered.

According to the state’s police commissioner, the shrine was the place where robbers and kidnappers worshipped and carried out fortification ritual before going for operations.

In a statement yesterday, CP Mustafa Muhammadu said 4 suspects were arrested during the raid carried out at dawn.

He added that some robbers arrested on Asaba/Benin Expressway took police to the warehouse which according to the suspects had been in operation since 2012.

Here is what the Police Commissioner told reporters:

“On a routine patrol, our men arrested several robbery suspects on Asaba/Benin Expressway. We have also arraigned many of them. The police set ablaze the warehouse for charms and the suspects are helping the police in further investigation.”