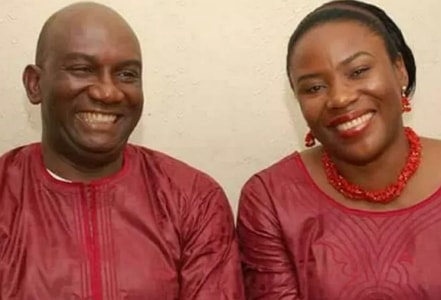 Siblings Of Lawyer Murdered At Diamond Estate Lekki Testify Against Killer Wife, Give Gory Details Of How Corpse Was Discovered

Siblings of Symphorosa Otike-Odibi, the 50-year-old lawyer who was allegedly stabbed to death by his wife, Udeme, on Monday narrated how they found his corpse.

They told a Lagos High Court that they discovered their brother on his matrimonial bed, with his genitals and intestines cut off. 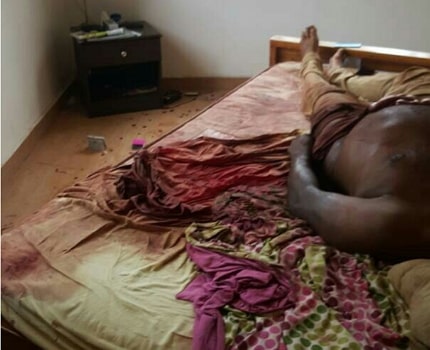 Led in evidence by Attorney-General Mr. Adeniji Kazeem (SAN), Grange-Koko said the deceased’s younger sister, Dr. Anwuli Akwukwuma, called him around 2am on May 2 to go to the deceased’s home and check what was happening.

Grange-Koko said he went there, but could not enter the house.

He said no one answered when he knocked the gate.

Grange-Koko said he returned to his house, but rushed back to the deceased’s home when Akwukwuma called back, expressing fear that life might be involved.

He said he went with his wife.

“When we got to the estate, we called the security men to go with us. On arriving at the place, we climbed the fence to gain entry to the compound.

“We broke the front door to gain access to the house because nobody answered us,” Grange-Koko said.

He said he ran upstairs and saw blood on the floor, adding that he traced the deceased to the bathroom and bedroom.

The witness said together with the security men, they broke the door and entered the deceased’s room.

He said they saw him lying on the bed with his wife, Udeme and there was blood everywhere.

“The deceased’s intestines were outside. I ran out and met his sister heading for the room. I tried to stop her from entering the room, but she ran past me and entered,” Grange-Koko said.

He said the sister ran out of the room and shouted that her brother was dead.

Grange-Koko said the defendant was taken to hospital.

“When I got to the deceased’s home and saw him lying on the bed with his intestines out, I checked him and saw that he was already cold. I noticed that he had died,” he said.

Akwukwuma said she called Grange-Koko because he lived in the same estate with the deceased and was his friend.

She said their mother informed her about the quarrel between Otike-Odibi and Udeme, adding that the deceased had complained to her that his wife attacked him with a knife.

The widow, Udeme, 48, is facing a two-count charge of murder and misconduct preferred against her by the state.

Udeme reportedly committed the offence on May 3, at their Diamond Estate, Sangotedo, Lekki, Lagos home.

She pleaded not guilty and was remanded in Kirikiri prison.