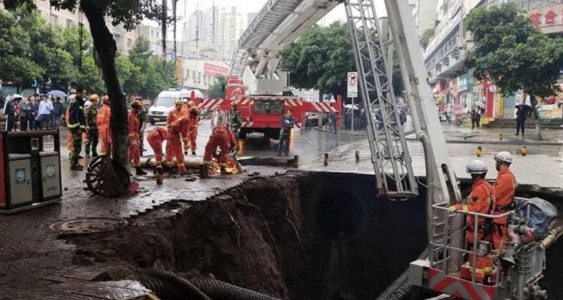 Rescuers in China are searching for a man and his grandson after the pair plunged into a pavement sinkhole that also claimed the lives of two others., Yahoo News UK Reporting

The freak accident happened at around 2.30pm (local time) on Sunday when the sinkhole measuring over seven metres wide suddenly opened up in a busy commercial district in Dazhou city in south-western China.

5 people fell into the hole after the pavement gave way, with one young man immediately plucked out by passers-by, while the four others disappeared into the ground.

CCTV images from a nearby shop show the victims unable to reach safety before the ground beneath their feet suddenly collapses.

The footage also shows two firefighters nearly becoming victims of the sinkhole themselves when a secondary collapse occurs while they are inside.

The pair managed to scramble to safety as the ground continues to cave in, the video shows.

It took rescuers some 10 hours to locate the first victim at 12.10am the following day. The second was found at 9.36am, but both were declared dead by awaiting paramedics.

Officials say the two missing victims are a man and his grandson, who had been missing for more than 24 hours at the time of writing.

Rescuers have significantly widened the search area using excavators, while the exact cause of the collapse is still being investigated, according to Chinese state media.