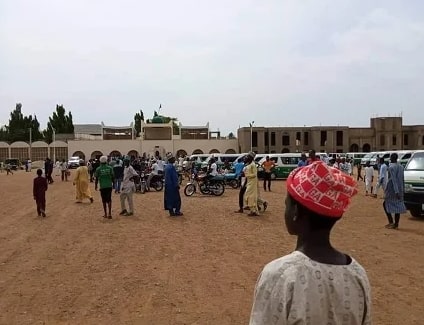 19 travellers from Sokoto State who sneaked into Ondo State in the dead of the night are to be sent back.

It was gathered that the Almajiris came in a truck used for conveying cement.

The moved into the state at a time Governor Oluwarotimi Akeredolu ordered total blockade of some routes into the state to enable security operatives function properly in the few remaining borders.

Residents living around Oyemekun road in Akure, the Ondo capital raised the alarm when they saw the Almajiris on Tuesday morning.

Some residents in the area said they opted to keep watch over the Almajiris when they noticed their presence to prevent them from leaving the area to unknown destination.

Witnesses said their bodies were covered with dust from cement.

One of them was said to have given his name as Garba and told interrogators that they arrived the state on a bus from Sokoto State.

He was said to have kept sealed lips on why they embarked on the journey to the state.

Senior Special Assistant to Governor Akeredolu on Security Matters, Alhaji Jimoh Dojumo, said he led the state’s Task Force Team on COVID-19 to where the Almajiris were dumped to carry out the Governor’s order that they must be returned to Sokoto State.

Dojumo however urged neighbouring states to be vigilant in their surveillance at the borders.

“We received information that some almajiris numbering about 20 were dumped in this particular location by some trailers at night time and they are stranded here without knowing their particular destination.

“Mr. Governor has directed that they should be returned to the way they were coming from because we believe they came in through a border, states before they got here. We expected the authorities of those states to check the movements before getting to us.”

“It is like we have helped Osun State to check it now. They are not moving towards Osun. We don’t even know if this is their final destination anyway but the fact remain that we have been able to check them here and we are returning them back.

“We agreed that our borders are still porous but what we are doing now is the blocking of the unmanned borders. There are a lot of porosity at some border routes and bush parts that security agencies does not have the strength to block, and that is where the governor is now blocking totally with concretes. That is why we are moving to Akoko/Imeri axis of the state to go and block all those areas now, to block all those feeder roads.

“Most of the people (Almajiris) might have come through these bush parts beating the authority at the main road. We cannot rule that one out totally. The issue of compromise cannot be hundred per cent rule out.

“On Monday, we were at Ijare and we have blocked a reasonable part of the place and no vehicle can come to Ondo State.”

Meanwhile, the Ondo State Police command has urged residents to be vigilant and report to the appropriate authorities anytime they come in contact with strange faces.

According to the Command’s Public Relations Officer, ASP Tee-Leo Ikoro, emphasized that the Almajiris do accompany trucks from the northern parts of the country under the pretense of transporting foodstuffs.