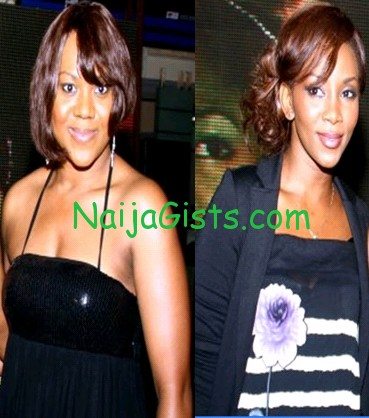 Nollywood movie producer, Charles Novia‘s unpublished book, Nollywood Till November is a memoir that reveals the current issues in Nollywood like never before. naijagists.com

In the 1st excerpt from Nollywood Till November Memoirs, Charles Novia talks on how he had a minor fight with Nollywood actress Omotola Jalade and how he caught Genevieve Nnaji smoking.

In this portion of the memoirs, Charles talked at length on the rivalry war between two Nollywood super stars, Stella Damasus and Genevieve Nnaji.

Excerpts from Nollywood Till November below:

The Producer in me wanted to titillate the audience with a box office pairing never before seen in Nollywood.

I had for a few months wondered how it would be like to have Genevieve and Stella Damasus in leading roles in the same movie. They both were audience favourites for various reasons and the prospects of having another box office hit with both of them was quite appealing. Besides, the script ‘MORE THAN SISTERS’, was just right for both of them to explore their creative abilities.

Stella promptly signed up for the movie as did Segun Arinze, whose re-branding process was an on-going project for me. He was cast as a mellow ‘bad-guy-turned-good-guy’ who paid the ultimate price just to pay back a favour. We went on location after a couple of rehearsals.

The chemistry and energy between Genevieve and Stella was amazing. Both actresses gave amazing performances. They were literally smoking! Somehow though, I could sense an unspoken professional rivalry between both of them. A certain competition to outshine each other, behind the friendship they had.

When I noticed a bit of that, I had to consciously rein in artistic excesses where I felt their acting could become melodramatic so as not to lose the essence of the story. But incidents like this were few.

Though both actresses were friendly with each other, at that point in time, Genevieve was the bigger box office star. I expected some diva tantrums for her and was quite prepared to either curb such or handle it with the firmness I had devised for such but surprisingly, she was very co-operative and blended with cast and crew alike.

Our mutual professional respect for each other developed the more. I remember on the third day of recording, one night while shooting at a clinic in Victoria Garden City Extension, I came out for a bit of fresh air while the technical people were setting up for the next scene. I saw Genevieve in a dark corner of the building, smoking a cigarette. ‘Whoops! You caught me’, she said, laughing. ‘You smoke?’ I asked, a bit surprised. ‘Now and then. It relaxes me ’ she said. ‘Do you smoke?’ ‘Never have. Never will.

But I don’t have any problems with people who smoke though. But health wise, I hope you stop soon.’ I replied. ‘I am trying to. Sit with me a bit, lets talk about this scene ’ I sat with her and I explained some few things to her about the scene. We also talked about a bit of her stardom and how she was coping with it. She was in a chatty mood and it was a revealing conversation.

That evening, I saw a vulnerability in her, I had never seen before.

This young lady, by a dint of her talent, hard work or fortune, had super-stardom thrust upon her and seemed to have no private life anymore. She had become one of the most recognisable faces in the continent and whilst enjoying the adulation, she was also coming to terms with the scrutiny of her Privacy, which was not too palatable to her.

I admired her courage and somehow felt that she would go places beyond Nollywood. I remember I told her so.

Genevieve was quite particular about make-up. She would spend many minutes, ensuring that her face was well-powdered.

She had some pimple breakout on that shoot and wanted them less visible on screen. She would have mild arguments with the make-up artiste about the right powder application to her face and at times would go out of her way to make up herself after the make-up artiste must have finished.

I found this quite amusing and in some cases, I did not mind her fussiness over her make-up as the script progressed from a flashback period to ‘present day’ and I felt if she had to hide her blotches, she was very well within her ambits to do so, in tandem with the character who was supposed to be trendy.

I remember when we went to Ikorodu village to shoot some forest scenes, it was getting late and we had one night scene left to shoot. The time was about 7.30pm and it was supposed to be the last scene for the day. Genevieve took some extra time on her make-up.

Stella walked up to me in agitation. ‘Sir, please tell Genevieve to hurry up. Its late, we are in the middle of nowhere and she’s still making up. I am a wife and mother. I have kids to attend to at home tonight.

She should not waste our time.’ I looked at Stella in surprise. There was an unusual edge in her voice. I could not fathom out why she would sound a bit antagonistic. I knew she had a point on the time being spent by Genevieve in making up but I always assumed she had been ok with it. But she did have a point about the time being a bit late and we were actually miles away from the main town in a bush somewhere! I walked up to Genevieve who was rubbing powder on her face, while the make-up artist stood nearby, warily telling her she had over-done her face . ‘Genny, lets shoot this. Its late. Come on!’ ‘Just a minute, sir’ she replied.

She spent a few more seconds dabbing powder over a big pimple on her cheek. Stella was behind me, scowling and tapping her foot, impatiently. I took the whole incident between them as one of some brimming rivalry among actors which directors and Producers face at times on set so I did not pay much notice to it.

However, I was taken unawares by what happened a few days later!