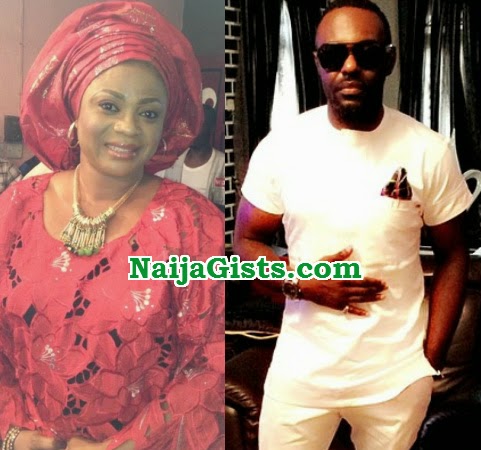 Excerpt from the interview, enjoy:

You have been away for a while. What happened?

I have been everywhere. I only reduced the numbers of films I featured in and concentrated more on soap operas. And that was for two years.  I have also been working on my talk show that would soon hit television screen.

Can we say this is as a result of producers patronising younger actresses?

Not at all. Many scripts come my way. I only accept to feature in quality and challenging films. The industry is big enough to accommodate every good actor and actress. Every age has its role in movies.

Can we also trace the incessant crisis in Actors Guild of Nigeria AGN to this?

Crisis in AGN is quite embarrassing and disheartening. Actors are supposed to understand human psychology better. Actors serve as mirror  to the society but we are finding it difficult to maintain peace among ourselves. During my tenure as the vice president of the guild, myself and other executives worked tirelessly to build the industry. We made the welfare of our members our priority. Things took another turn when artists began to get money from the government and politicians. In a nutshell, AGN crisis began when money was placed over artists’ welfare.

What’s your take on the present crisis in AGN?

There are two sides to this issue, legal and artistic.  I have heard many versions of this side, one person won a particular election and another group conducted another election.  I  can’t really place which is correct. I can only beg the court to be fair. On the other hand, crisis in AGN is a derailment on the part of the artists. We shouldn’t allow our personal interest rob the industry of its exalted reputation.

You joined the industry as a spinster. Would you say this affected your love life?

I joined the industry when I was 21 and a graduate. Perhaps it did but I didn’t just notice. It’s possible a suitor was somewhere eying me but didn’t show up because of my profession. I was too engrossed in my career that I didn’t encounter one but there would have been someone like that.

After separating from Jim Iyke, you said you still loved him. Is it still the same till date?

(smiles) Is it possible to live my life away from Jim Iyke? He wasn’t the first person I dated in life.

(cuts in) The first in Nollywood?

So what? I want to be mute regarding this issue. He has never talked about me anywhere. We have an understanding and I don’t want to break it again.

Do you still have crush on him?

I don’t hate him.

Your marriage to Lanre Falana did not last. Why?

I was never married but I was involved in a marriage process which got truncated along the line. Marriage begins with  paying the woman’s dowry,  traditional and white wedding. All these did not take place. My family didn’t support marrying a man who kept one woman in one place and plans keeping another one in another place. I  attend Catholic church and the  marriage process in Catholic, begins with the intended couples tendering a marriage certificate issued by a court to the church. This was the main reason we were in court in the first place.

Was it cultural differences that led to the break up?

Not at all. It was based on personal conduct and irreconcilable differences . We were not living together. We had the court marriage in July and he went abroad September. Only for him to come back like a year and half later.

You said in an interview that you had no regret about your ‘’truncated marriage process.’’ That is because I am not a party to pretence. That marriage would have made me a sad woman. I have learnt not to judge a book by its cover. Any plans of marrying again? It has not been easy. You hardly can differentiate between a man who truly wants you as a woman because he feels for you , or one who wants to be seen with a known actress. Some men can go as far as taking a bet over you because you are a known actress. But when a good man comes around, I will settle with him. However, my Bible has not told me I cannot make heaven as a single woman.