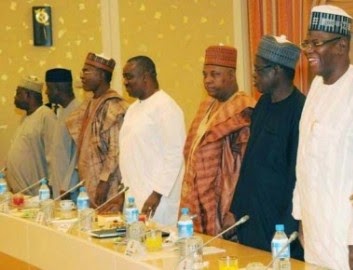 1. During the Yar’adua’s administration, militants’ activities in Niger Delta led to substantial drop in crude oil production from over 2.5 million barrels per day to just over 700,000. To restore normalcy to the region, Niger Delta elders led by the then Vice President, Dr Goodluck Jonathan went into the creeks and persuaded their children [militants] to embrace peace. Similarly, when activities of OPC were becoming a threat to national security, Yoruba elders met with their children [OPC members] and persuaded them to embrace peace. But in the north, instead of adopting similar measures to restore peace to the region, you are busy looking for whom to blame. According to you, Boko Haram terrorists are not northerners but southerners, financed by southerners to destroy the north. Unfortunately, while you are busy playing the ostrich, a sizable part of this nation is being destroyed by Boko Haram terrorists and Fulani herdsmen.

2. In 2010, Alhaji Kaita promised to make Nigeria ungovernable for Jonathan if he was elected Nigerian president in 2011. In 2010 also, Atiku Abubakar promised to bring about violent change if he did not become Nigerian president in 2011. As promised by Kaita and Atiku, Boko Haram metamorphosed into a deadly terrorists sect overnight as soon as president Jonathan was sworn in as president in 2011. Just recently, Dr Junaid Mohammed threatened that ‘if this President rigs himself back into office in 1015, it may very well mark the end of this country’. One hopes Dr Junaid Mohammed, his wives and children will personally participate in his self-imposed mission to destroy Nigeria.

3. You called for investigation and prosecution of General Ihejirika [rtd] and Senator Sherriff based primarily on accusation by Mr Davies. The same Mr Davies accused you of using Boko Haram to destabilize Jonathan’s government and that if Jonathan should arrest you, he would be accused of witch hunting. He also accused a high ranking official in CBN who recently left CBN of financing Boko Haram. But you feigned ignorance of these aspects of Mr Davies allegations. Of recent, Mr Obermayr, a member of European Parliament accused General Buhari [retd] of financing Boko Haram and Alhaji Atiku of being financed by Al Qaida to destabilize southern Nigeria. He also accused APC of channeling European Parliament financial aids to support insurgency in Eastern Nigeria. As expected, you and Chief John Oyegun, APC Chairman are exhibiting incurable symptoms of selective amnesia as regards those accusations. Even the great twitter master of Nigeria, Mallam El Rufai is yet to twit on Mr Obermayr’s allegations up till date.

4. You often celebrate Boko Haram attacks on security forces as a manifestation of Jonathan’s incompetence but any counter attack by security forces against Boko Haram attracts prompt and scathing criticism from you. According to you, Boko Haram terrorists are fighting for their rights the same way Niger Delta militants did, hence government should stop attacking them, rather they must be granted amnesty also. By your actions, utterances and body language, you created enabling environment for Boko Haram to grow into the present monster that is currently decimating the region. You condemned Boko Haram only when they attack mosques or Muslims. When Emir of Kwarso was killed by the sect, Sultan Abubakar only admonished Boko Haram to ‘stop killing Muslims’.

5. Northern Nigeria is synonymous with violence and this had been the norm even before President Jonathan assumed power. Though you want everyone to convert to Islam, but during every religious riot, you engineered the slaughter of anyone who is not a Hausa Fulani Muslim, irrespective of his or her religion. Mr Gideon Akaluka was beheaded in Kano in 1996 for just touching Holy Koran. Hundreds of Nigerians were killed in the north when you organized a religious riot against the hosting of Miss World Contest in Nigeria in 2002. In 2005 in the north, hundreds of Nigerians were killed in religious riot because a newspaper in Norway published a caricature of Prophet Mohammed. A Yoruba lady [teacher] from Ogun State was roasted in Bauchi by her Muslim students who accused her of touching Holy Koran in 2007. Some bloody religious riots are Maitatsine riot in Kano in 1983, 1991 riot in Kano against Evangelist Bonnke, Maiduguri riot in 2006, Sango Kataf riot, Sharia Law riot in Kaduna in 2000. In short, there is no year without bloody religious riots in the north, all perpetrated by you. Consequently, there is no town in the north today that Muslims and Christians live together in peace. Added to this is the widespread destruction of lives and properties of Christians by Fulani herdsmen in Kaduna state, Kogi state, Nasarawa state, Benue state, Taraba state, Plateau state, Adamawa state and, even down to Anambra state, Enugu state and Oyo State.

6. The inspiration for you to always orchestrate bloody religious riots could be attributed to your resolve to implement Sultan Ahmadu Bello’s Doctrine which states ‘the new nation called Nigeria should be an estate of our great grandfather Othman Dan Fodio. We must ruthlessly prevent a change of power. We must use the minorities in the north as winning tools and the south as a conquered territory and never allow them to have control over their future’. Another source could be Organization of Islamic Countries’ [OIC] Abuja Declaration of 1989 which enjoins all member countries to ensure only Muslims are elected to all political posts of member nations, eradicate in all its forms and ramifications all non-Muslim religions in member nations [ such religions shall include Christianity, Ahmadiya and other tribal modes of worship unacceptable to Muslims], ensure ultimate replacement of all western forms of legal and judicial systems with Sharia in all member nations before then next Islam in Africa Organization [IAO] conference and ensure the appointment of only Muslims into strategic national and international posts of member nations. The IAO was founded by OIC in 1989 in Abuja to implement Abuja Declarations and incidentally, one of you, Doctor Usman Muhammad Bugaje is the current Secretary General of IAO.

7. Because of stiff opposition by you, emergency rule imposed in the 3 north eastern states is not comprehensive. If you had allowed for imposition of emergency rule with a military administrator in Borno state, Governor Shetima would not have had the opportunity to organize the controversial abduction. On 11 June 2014, Governor Shetima said Boko Haram might attack southern Nigeria, then on 15 June 2014, 3 bombs were detected in Winners Chapel Church in Owerri. Same day, soldiers intercepted 33 buses around 3 a.m. in Abia state with 486 Hausa Fulani Muslims. Amongst these, 86 of them were confirmed members of Boko Haram but led by Sultan Abubakar, you called them ‘innocent Hausa Fulani businessmen’ and demanded for their unconditional release, though none of these ‘businessmen’ had up to even N1,000 on him. On 20 June 2014, Boko Haram suicide bomber was arrested while trying to plant bombs in a school in Owerri. Mallam Shehu Sani said that Boko Haram would like to exchange the girls with their members in government custody, and the next day Shekau, Boko Haram leader announced same to the public. How did Governor Shetima and Mallam Shehu Sani get the information from Boko Haram?

8. Governor Shetima is old enough to make informed decisions but he decided to play politics with human lives. If Governor Shetima’s children were in that school, would he had refused to move the students to Maiduguri as advised by Federal Ministry of Education as well as refused to provide adequate security in the school as he promised. Why did Shetima replace all Christian staff with Muslims prior to the abduction? Why is it that on the night of the said abduction, the staff and their families did not sleep in the school? Why is it that over 90% of the girls are Christians? How comes none of these physics students could speak English? Is it possible to have over 200 students, all girls offering physics in one school anywhere in Nigeria? Initially, the Principal, Mrs Asabe Kwambura said she was present when the girls were abducted, why did she change her story that she was at Maiduguri when the abduction took place. The number of the abducted girls was put at 129 initially, why did the number increase to over 200 after Shetima offered to pay each family one million naira? While you mount pressure on the presidency to facilitate save return of the girls, you should also cause your son, Governor Shetima to provide answers to above questions. However, you can ignore this suggestion if you actually connived with Governor Shetima to facilitate the abduction of Chibok girls for political gains.

10. You want power to return to the north next year at any cost. Some of you had gone further once again to threaten to make the country ungovernable if a northerner does not assume power next year. It is a fact that most of you are in your sixties and above, hence you think you have nothing to lose if you set the nation ablaze. If that happens, you will surely relocate abroad with your families and from the comfort of your lavishly furnished palaces, watch innocent Muslims and Christians kill themselves. If all elders in Nigeria will resort to violence to press home their demands like you, will there be any country called Nigeria by the time the winner finally emerges. Please talk like a typical African elder who is an embodiment of wisdom, peace and humility and not like a motor park tout.

11. The vast majority of people of Niger Delta believe [rightly or wrongly] that Hausa Fulani politicians use Boko Haram and Fulani herdsmen to destabilize Jonathan’s government. Consequently, they may destabilize any government headed by a Hausa Fulani president. Niger Delta people are not against the rest northerners, hence, to avoid a situation whereby Nigeria will be forced to fight three wars [Boko Haram war, Fulani herdsmen war and oil and gas war] simultaneously with no money to prosecute the wars, Hausa Fulani politicians should step aside for now. There are many capable and credible northerners [both Christians and Muslims] such as Sam Nda Isah, David Mark, Iyocha Ayough and many others whom the north can jointly adopt and support to contest for presidency. You will as expected, wave this suggestion aside as an idle talk, hoping that you will cross the bridge when you get there. From available indices, there may be no bridge to cross because emergence of a Hausa Fulani president next year through whatever means, will usher in unprecedented disruption of gas and crude oil production throughout the duration of the government.

12. Instead of wasting precious time trying to blame anyone but yourselves, you should meet with your children [Boko Haram members] and persuade them to embrace peace just as Yoruba and Niger Delta elders did. You may not feel threatened by the avoidable disaster you have brought on the north. This is because your people will believe and do whatever you tell them without a second thought. This also informs your penchant to relish in issuing threats with or without provocation. Having produced easily manipulated, inexhaustible reservoirs of human robots through deliberate adulteration of Almajiri System of Islamic Education, you are emboldened to play the ostrich while the north is on fire. May Allah grant you the grace to retrace your steps for the benefits of the unborn generations in your various communities, Amen.