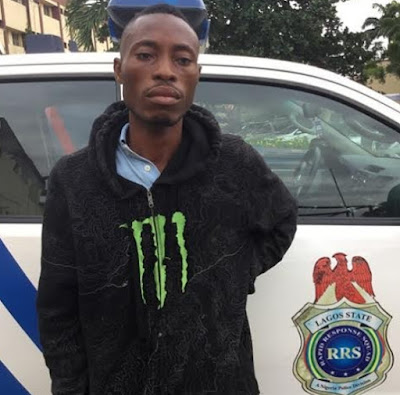 A Uber driver, identified as Hammed Olojo, 31 was on Sunday afternoon restrained by operatives of the Rapid Response Squad on patrol of Third mainland bridge from jumping into the Lagoon.

Olojo, who drove himself to the Third mainland Bridge in a Uber Toyota Corolla saloon car had written a short note and left it in the car when he was retrained by the officers who monitored him a while before walking up to him.

Olojo, an ex – convict, drove the grey Corolla with the registration number EKY 312 ES belonging to Kalejaiye Oluwaseyi to the bridge before attempting to leap into the Lagoon.

Questioned by RRS Commander, ACP Tunji Disu on why he contemplated suicide, Olojo explained that he was owing N10,000 in Court 3, Ikeja High Court and the owner of the vehicle N80,000:00.

He stated that things have been difficult for him and that he had tried all possible means to survive with no success.

Olojo disclosed that his wife persuaded him from going ahead with his plan but his mind was made up and was fed up of everything.

Olojo, had planned to leave behind a short note in Yoruba and translated into English in the car before leaping into the Lagos Lagoon.

The letter read in part “I killed myself because of the challenges I have been facing in life. I tried my best and everything has come to nothing”.

He also added in the letter that he was owing a creditor N10,000 in Court 3 of Ikeja High Court and N80,000 for the owner of the UBER car he was driving.

Kalejaiye who was at RRS office in company of his wife noted that for two weeks, he had not remitted N40,000 per week lease to him yet and he Kalejaiye, has been paying for the service of the car.

He noted that although, he told him to hand over the car last Thursday, at no time did he force him not to drive the car.

He noted that he was aware that he had a court case, at no time did he put him under pressure about the car.

In the note which was dated 27th August, 2017 and signed by him, Olojo indicated his phone number and the car owner’s number.

Confirming the development, Police PRO stated that the case had been transferred to State Criminal Investigation Department for further investigation.