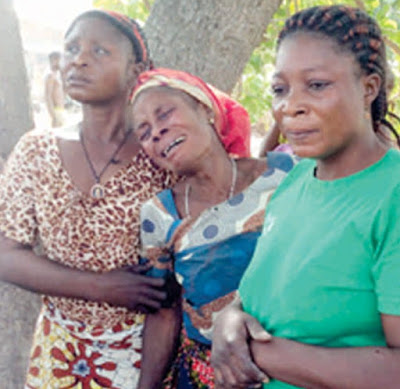 Some masked gunmen suspected to be Fulani militants went on rampage on Thursday night exactly 10 hours after the State Governor raised the alarm that they were coming.

4 persons ,including a couple ,were murdered at Ngutwsem village in Gassol local government area in the night attack.

A relation who witnessed the invasion said that as soon as Shiriga heard the first sound of gun shots,he took his wife to a place outside their house where he thought she could be safe.

“He was returning to pick their baby when the invaders shot him. His wife then cried out from where she was hiding. She was gunned down too,” he said.

She was not at home during the invasion,having travelled to Sabon Gida.

The village was largely deserted ,most residents taking to the bush to hide and fleeing to Sabon Gida..

No policeman was sighted in the area.

On seeing the journalists and the policemen,the hiding villagers came out and hurriedly used blunt diggers and hoes to dig two graves for the purpose of burying the victim.

The graves were shallow and there was no coffin to put the dead inside.

A cursory look at the bodies showed that after being shot,the assailants proceeded to cut them in the head, neck and back with machete to ensure that they had no chance of surviving.

He said: “We are on notice that in 10 days, we (Taraba) shall be attacked. I have alerted all security agencies. We are waiting.

“A helicopter has dropped arms and ammunitions in the night without its mission established. It is not a time to keep quiet; we are living in fear,”

Simon Tsavwua, 45, a brother to one of the victims said he had gone to bed leaving some members of the household outside.

He knew they were under attack.

He quickly ran outside and hid.

The attackers were over 20,he said.

They wielded automatic rifles and machetes.

“But where I hid was close to where one of my brothers was killed. He cried before giving up. There was nothing I could do,” he said.

Continue Reading
You may also like...
Related Topics:attack, Fulani, taraba