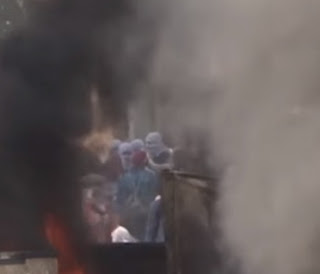 At least 4 children have died after some suspected terrorists threw petrol bombs into their home, setting them ablaze.

The trend, The Nation gathered, has caused apprehension amongst residents of Ogwashi-Uku community in Aniocha South L.G.A of Delta State as some homes have come under attack in recent weeks.

A warder at the Federal Medium Prisons Ogwashi-Uku, who is also a pastor with the Redeemed Christian Church of God, Sidney Nwaiga, was the latest victim of the attack as arsonists threw petrol bombs into the room where two of his kids were sleeping at their Ubulu-Unor Road residence.

The pastor was however severely burnt while trying to rescue the children from the inferno, a source told The Nation.

The Nation gathered that the two children later died while the clergyman was rushed to the Nnamdi Azikiwe Teaching Hospital Nnewi, Anambra State.

Similarly, a female polytechnic student received severe burns when an unknown person throw petrol bomb into her room, even as the police are said to be on the trail of the victim’s boyfriend who allegedly had a misunderstanding with her few days before the incident.

It was further gathered that a woman also lost her two children on Isah road area of the town in a similar circumstance.