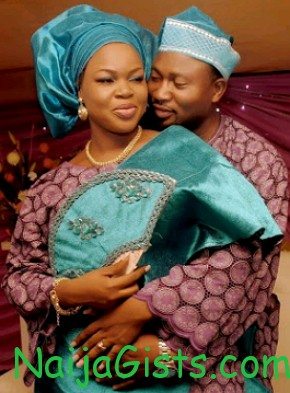 According to the latest revelations from sources in the know, Taiwo Aromokun’s husband is popularly called Ogun Re by his pals in Holland.

To the shock of many, the man in Taiwo’s life had lived in Holland for over 13 years with no legitimate career.

The shocker is that the highly celebrated man in Taiwo Aromokun’s life has two children for a Dutch woman who is unaware of his celebrated wedding to the actress in Nigeria.

Mr Olayemi Abimbola’s first son is close to 7 years now and few years back, he staged a celeb-style birthday party for him in Holland. Popular Fuji star, Pasuma Alabi played at the party.

As we speak now, Taiwo Aromokun can not join her hubby in London because he doesn’t have a stay there and secondly, she can’t relocate to Holland because the mother of his two children lives there.

All of the above point to the fact that the guy is stuck in Nigeria presently.

All he can do for now is to visit Holland to see his kids and enjoy abroad life before returning home to his second wife.

In an interview she granted last year, Taiwo Aromokun said she married her Londoner lover because Nigeria-based men have a ‘stupid’ mentality about women.