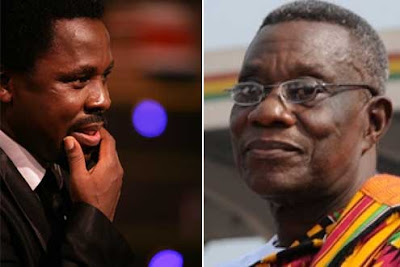 Professor John Evans Atta Mills, the late President of Ghana who died yesterday was reported to have a spiritual link to TB Joshua. naijagists.com

We learnt one of his aide introduced TB Joshua to him.

TB Joshua was brought to Atta Mill’s office with some arguing that he needed TB Joshua’s anointing for healing and to win his presidential elections.

In an interview with TheNews on the 11th of January, 2009, he started attending TB Joshua’s sermons.

We learnt for more than 10 years, Atta Mills shuttled between Accra Ghana and Lagos Nigeria to develop a stronger bond with TB.

“My brothers and sisters in Christ, I want to thank the Almighty for making it possible for me to be here this morning to take part in this thanksgiving service. I am no stranger to the Synagogue. Indeed, I have been coming here very regularly and I have known the man of God (Joshua) for more than 10 years. I first met him when I was Vice President of the Federal Republic of Ghana. And I have continued to maintain the relationship ever since,” Mills told Joshua’s followers.

After two failed presidential elections, Mills was fickle-minded about another shot at the Presidency and he turned to his friend and spiritual counsellor, Prophet TB. Joshua.

“He (TB Joshua) said to me, this is my time but there would be hindrances and hurdles on the way,” Mills told TB Joshua’s church at a thanksgiving service organised in his honour on 11 January 2009.

“I was asking myself, if there was a run-off on 28 of December 2008, give ourselves two days for the Electoral Commissioner to come out with the results and we would run into January. I kept this at the back of my mind.

“We had the elections right on 7 December. There was a run-off on 28 December. And we had the third election in one constituency (Tain in Brong Ahafo region). The results were announced in January,” Mills narrated to a thunderous ovation.

After the thanksgiving service, Mills granted a 10-minute interview to TheNews team that he had been sick and had gone to South Africa for an operation.

“”I think I am as strong as I can be. You can assess the situation yourself. Yes, I had cataract operation, I was sick and had to go for operation in South Africa. But I am strong and ready to take up the challenge for the next four years. I am human like any other person, so who doesn’t fall ill? The fact that you are strong today is no insurance that you cannot break down tomorrow,” Mills said. He died yesterday before completing his four year term. He is the first Ghanaian president to die in office.

President Mills was known as a “man of peace”. He was the Vice President of Ghana under the second NDC government from 1997-2000.He contested the presidential election in 2000 but lost to President John Agyekum Kufuor in the second round of the vote.

The tax expert and law professor was born on 21 July, 1944 at Tarkwa.He attended Achimota School, University of Ghana, Legon, London School of Economics and Political Science (LL M), and the School of Oriental and African Studies, University of London (Ph.D). He was chosen by President Jerry John Rawlings as his running mate in 1996 and the ticket won the election for him to become Vice President.

He was married to Ernestina Naadu Mills, an educator, and had a son, Sam Kofi Atta Mills.

Meanwhile, Ghana is in a state of mourning aftr Mills passed on at the 37 Military Hospital in Accra on Tuesday afternoon, according to a press statement signed by the Chief of Staff, Mr John Henry Martey Newmann released by the Ministry of Information.

The Speaker of Parliament, Justice Joyce Bamford-Addo, summoned all members of the House to an emergency sitting at 1800 hours for the swearing in of the Vice President in accordance with Article 60 (6) of the Constitution.

Reports from across the country say people have been wailing since the news broke in the afternoon.

Shocked shop owners, drivers, civil servants, market women and members of the public could be seen making telephone calls to friends and family members as well as politicians to confirm the sad news.

Traders at the Accra Tema Lorry Station broke down in tears when it was announced that President Mills had passed on.

The traders, mostly women, cried their hearts out saying they did not believe the President had died.

World leaders have commiserated with Ghana over the death of their president.

President Goodluck Jonathan expressed shock at the death of Mills.

Other world leaders, including US President Barack Obama and British Prime Minister David Cameron, have also commiserated with Ghana(pm).

TB Joshua’ Question of the day

How come most leaders / Presidents with ties to TB Joshua always die untimely ?.