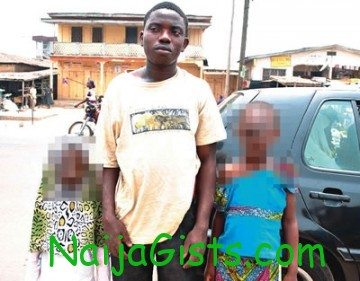 A 29-year-old Mathematics and Social Studies graduate of a college of education, Mr. Seun Oyeleke, has been caught pants down with a seven-year-old female pupil in a school toilet.

One of the pupils’ mother, Mrs. A Ajiboye, had been informed by her son, who attends Oyeleke’s tutorials with her five-year-old sister, that the teacher was fond of taking the girl out of the classroom to an unknown destination.

“I told my brother, who is a policeman, and he urged me to be patient. My brother then devised a plan with which we caught the teacher,” she said.

Ajiboye told her son that whenever the teacher took her sister out, he should run home and inform her immediately.

But on Saturday, Oyeleke took another girl to the toilet on the school premises and the boy quickly dashed home to inform her mother.

The mother rushed to the school, where he found the teacher on a seven-year-old inside the toilet.

Narrating the incident to PUNCH Metro on Tuesday, Ajiboye said, “When my children were leaving for the tutorials on Saturday morning, I told my son to rush back home whenever the teacher takes any girl to the toilet.

“At about 11:30am, my son rushed in to inform me that he had taken another girl out, I quickly rushed to the school, went to the toilet and forced the door open, I met him on top of the little child.

“I was very furious and I began to shout and wail. I called on neighbours to come and see what was happening. He was subsequently taken to Dugbe Police Station in Osogbo.”

“He took me to the bathroom in the building and removed my pant and lay on me and later asked me to wear my pant back and return to the class,” the little girl said.

At the police station, the teacher pleaded, “Please, spare me; I didn’t know what came over me. The effect of what I did just dawned on me. I did not rape them. I only had sex with them. It’s the devil’s work.”

But the proprietress of the school, Mrs. Amoke Alao, denied insinuations by neighbours that the teacher was notorious for sleeping with minors.

Alao said Oyeleke was perceived as a religious and diligent person and nobody suspected that he could commit such a crime.

Explaining that her children also attend the school, Alao said she would not have tolerated such a crime if she knew Oyeleke was doing it.

The proprietress said she was unaware of the tutorials organised by Oyeleke, saying that only one of the two affected girls is a pupil of her school, while the other only attended Oyeleke’s tutorials.

Both girls were taken to police clinic at Oke-Fia, Osogbo, where a medical officer attended to them.

The medical officer, who chose to be anonymous, said the teacher did not penetrate the vaginas of the girls, adding that his organ, however, had an impact on their pubic areas.

Police Public Relations Officer in the state, Mr. Taiwo Olugbemileke, said the case would be investigated since it had been reported to the police. (Credit: Punch NG)