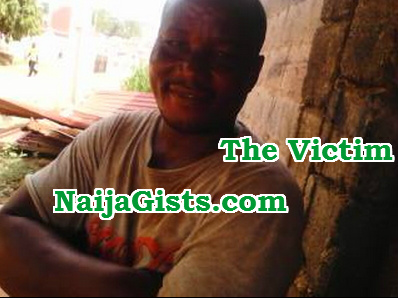 Sept 23, 2015 – Tenant Stabbed By Landlord Over A Girl In Benin City Left In Coma After Police Complained Of No Fuel

Medical doctors at the Central Hospital in Benin City are battling to save the life of one Alex Aigbogun who was stabbed in the stomach by his landlord, simply identified as Enogieru.

The victim was brought to the hospital at about 9:00am Wednesday by policemen in a Hilux van.

Eyewitnesses said the incident occurred at about 12:00midnight, but the victim’s family has no vehicle or money to take him to the hospital.

A neighbor to the victim said police told them there was no fuel in their vehicle to convey the victim to the hospital and that was why the victim was covered with cloth till daybreak.

A witness who gave his name as Peter Igbinosun said the landlord ran away after stabbing the victim.

Igbinosun explained that trouble started on Tuesday night when both the landlord and tenant went to a joint to take a drink.

He said the duo fought over a girl.

“They came to me and I settled the quarrel. I even asked this man to sleep in my house but he refused.”

“He stabbed him at about 12:00am and we didn’t have any money to go to the hospital. We went to the police and they said they don’t have fuel to take him to the hospital.”

“The landlord has no wife and he used bottle to stab this tenant many times.”