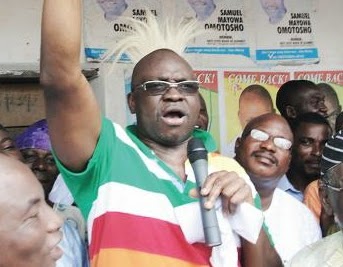 Ekiti State Governor Ayo Fayose continued yesterday his desperate battle to stave off impeachment.
There was tension in Ado-Ekiti, the state capital. Many schools remained shut at the opening of a new term.

Fayose’s supporters stormed the vicinity of the House of Assembly, protesting the impeachment proceedings launched by 19 All Progressives Congress (APC) lawmakers.
Fayose has been running the state with seven Peoples Democratic Party (PDP) lawmakers.

The APC lawmakers sent an impeachment notice to Fayose and his deputy, Kolapo Olusola, accusing them of gross misconduct in the performance of their official functions.
They wrote to the Chief Judge, Justice Ayodeji Daramola, after a special sitting, directing him to set up a seven-man panel to investigate the alleged gross misconduct.

Fayose, in a broadcast on Sunday, said that the Dr. Adewale Omirin-led APC Assembly members were planning to storm the complex. He urged his supporters to beseige the place and frustrate the plot to remove him from office.

The governor, who spoke in Yoruba charged PDP members, drivers, commercial motorcyclists (okada), market women and other interest groups to rise and defend the mandate they gave him at last year’s election.

Peoples Democratic Party (PDP) members from all the 16 local government areas stormed the Assembly complex, vowing to stop Fayose’s removal.
The PDP loyalists, who were mobilised by local government caretaker chairmen, chanted the PDP slogan – power and rained curses on the APC legislators whom they accused of harbouring plots to set the state on fire with the impeachment proceedings.

The Assembly complex was under lock and key. Heavily armed policemen blocked all the major roads linking the complex. The few vehicles that were allowed passage were thoroughly checked and passers-by frisked by security agency.

The Assembly complex was like a marketplace when reporters visited at about 11.00 am.
Most of the civil servants working in ministries, departments and agencies with offices in nearby State Secretariat stayed away from work for what they described as “security concerns”.
Unlike the previous protests, major roads of Ado-Ekiti were not blocked. Shops and markets were opened.But schools did not open.

Pupils and students were sent back home in Ado and Ikere.
Many parents, apparently reacting to the tension generated by Fayose’s broadcast, kept their wards.

The situation affected both public and private.
Some of the few ones that opened for third term resumption had to politely send back parents and their wards, on the excuse that the coast was not yet clear as far as safety of lives and property was concerned.

A parent, Mrs. Ajoke Ifeoluwa, said she decided to keep her three children attending a prominent private secondary school in Ado-Ekiti at home because she received a text from the school authorities on Sunday, shifting the resumption date till today as a result of security concerns. Another parent said: “What is the problem of these people? I paid my children’s fees at the bank last week, hoping that they will resume this morning only to meet the gate shut.”

The state chapter of the APC praised drivers and okada riders “for refusing to obey Fayose’s inciting order to foment trouble over alleged plan by lawmakers of the party to storm the Assembly with thugs to remove the governor”.

They said the drivers and okada riders were right to have shunned the protest so as not be used as cannon fodder “while the governor’s children are kept in safety and luxury abroad”.

APC Publicity Secretary Taiwo Olatubosun praised the transport workers for their courage and wisdom, saying it is callous for a man to put fellow human beings in harm’s way over protection of his interest while keeping his own children out of danger to enjoy safety in luxury.

“We praise the drivers and motorcycle operators for their courage and wisdom. Fayose is used to protecting his own interest and keeping his children in safety.
“The day he was first impeached in 2006, he asked his supporters to meet at Fajuyi to confront the soldiers. It was later that his supporters discovered that the governor had bolted in the booth of his car to safety while his supporters were tear-gassed with several of them wounded,” Olatubosun said.

The APC spokesman said the matter at hand was not about partisanship but about the abuse of the constitution, and wondered why Fayose believed he must win through violence all the time he tramples on the

“He first led thugs to sack the court and beat up a judge while court records in the Chief Judge’s office were torn. The Chief Judge’s secretary was beaten. Now, he openly made a live broadcast in the state media, inciting his supporters to an act of insurrection by disallowing the lawmakers to do their lawful duties.

“Even during Sunday service in the church, Fayose, to the shock of everyone, was inciting worshippers to protect the mandate they gave him through violent resistance to the lawmakers. Why must a governor
choose violence as a religion? Olatubosun said.

[By Odunayo Ogunmola, The Nation]