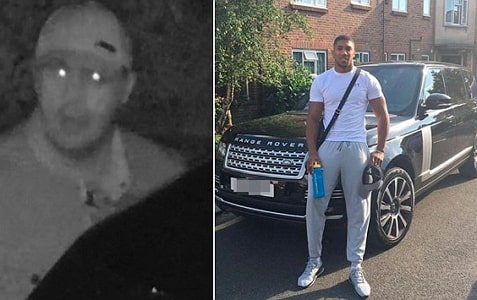 Boxing icon, Anthony Joshua’s specially built Bespoke Range Rover has been reportedly stolen in London. The world heavyweight boxing champion is probably the last man on earth whose car you think will be stolen.

The personalised luxury motor — valued at $270,000,000( about N1billion)- embossed with Joshua’s signature — was reportedly stolen on Thursday.

As reported the boxer was training at the English Institute of Sport (EIS) in Sheffield, South Yorkshire, when car was nabbed from a relative’s home in London.

Joshua parked the black motor — complete with a drawer for his world title belts — at the address while he headed north to make his final preparations for the bout.

His title belts are not believed to have been in the car at the time.

“AJ’s pretty annoyed about it because it’s so close to the fight. He doesn’t want any distractions at all,” a source said.

“Thankfully no one was hurt when it was stolen. There were no aggravating features in it which is a massive blessing.

According to news media in the UK, investigation is currently ongoing after the suspected thief was caught on camera.