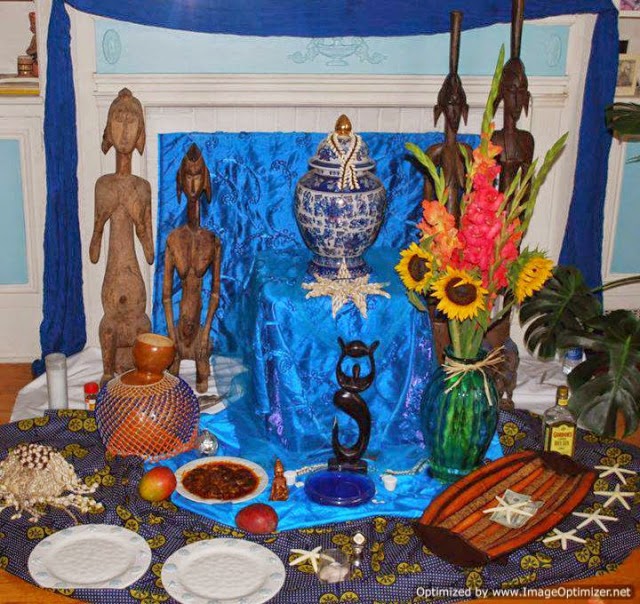 April 20, 2015 – Thieves Who Stole Artefacts From Malokun Shrine In Ode Irele, Ikale Ondo We Warned B/4 We Invoked Wrath Of gods…. – Chief Oluomo Tells WHO

Ode-Irele, an Ikale community and headquarters of Irele Lo­cal Government Area of Ondo State, was last week enveloped by mourning, following the death of many natives of the town.

A strange disease was ravaging the town, causing instant blindness and death. No fewer than 22 young men were despatched to their early graves.

Elders of the community said the town had not seen such a mysterious disease in its 200 years.

Many had wondered what could be responsible for the mysterious disease. But some leaders of the community insisted that the victims were involved in the theft of some ancient artefacts inside the Malokun shrine.

This submission was, however, countered by medical experts, including the state Commissioner for Health, Dr. Dayo Adeyanju. He said the strange disease could have been caused by poor hygiene and other issues, stressing that findings by medical experts on the matter would be made public after the conclusion of the laboratory tests.

But the rulers of Ode-Irele insisted that the epidemic was from the gods of the town who were angry with the community following the appearance of some unauthorised people in the revered Malokun shrine and the theft of ancestral artefacts by some residents of the town.

Till now, medical experts are baffled by the disease. Even international medical experts from the World Health Organisation (WHO) are at a loss over the cause of or cure for the strange ailment.

But it seems that the residents of the town, especially the natives, are not too worried about the development. A visit to the town by this reporter indicated that life goes on at Ode- Irele, as many shop owners have returned to their shops. Social activities are also continuing in spite of the disease. But some individuals were seen discussing the unfortunate incident, just as many were seen mourning their beloved ones felled by the disease.

Olofin of Irele kingdom and traditional ruler of the town, Oba Olanrewaju Lebi, was out of the town when the ugly incident happened, but it was gathered that he had been informed. Arrangements are on by the palace to appease the gods of the land, the reporter gathered.

The Oluomo of Irele Kingdom, who spoke on behalf of Oba Lebi, explained that the disease was caused as a result of some individuals’ disdain for the tradition of the community. He said the gods poured out their wrath on the town following the action of some individuals who visited the Malokun shrine without the necessary rituals and appeasement of the gods, adding that the thieves stole some traditional artefacts necessary for peace to reign in the town.

Hear him: “Some individuals who we believe are robbers went to where we call Oju Malokun shrine in Ode-Irele with an attempt to steal some antiquities at the shrine. It was impossible for them to steal many of the antiquities eventually, but they stole some artefacts which are useful to the town, and that was the major cause of the problem we had in the town.

“The gods became angry and we passed a warning round that anyone who stole or knew any person that stole any of the artefacts at Malokun shrine should return same within seven days, but they thought it was a joke. When we consulted the gods, the gods insisted that after seven days, if the artefacts were not returned, they would strike. And this message was passed round the town. At the end of the day, the gods struck in a strange manner, and many people were killed.

“There are ancestral artefacts and antiquities in this town that should not be seen by anyone, including the traditional ruler of the town, except the custodians of the shrine. Some of these artefacts are deposited at Malokun shrine. These artefacts were stolen and the thieves felt they could go scot-free.

“Only the custodians of the shrine are allowed by the gods to visit the shrine and that could only be done at night. But from our findings, these hoodlums and thieves went into the shrine, which is located in a secluded area, during the day and carted away the artefacts. That is the cause of the disease that cut their lives short.”

Corroborating his views, Oyewoga of Irele Kingdom, Chief Moses Oyewole said it was the palace chiefs who met at the palace of the Olofin of Irele Kingdom after the artefacts had been stolen that invoked the spirit of the deity on the hoodlums and cursed them with the strange disease.

He said the deity only visited the perpetrators of the devilish act through a strange ailment to expose them. “The disease was just the wrath of gods. It was meant for those involved in the theft of the precious artefacts and not for the people of the town. Any of those who stole the artefacts would be struck down by the ailment, even if he or she is outside the town or even outside the country.

“We knew that none of the thieves would confess that they stole the items, because if they say the truth, they will die. Many of them are the miscreants residing in the town. They are mostly commercial motorcycle riders. The effigies and historical artefacts they carted away are important to our existence in this community.

“We specifically told Malokun, the god of our land, to punish those who looted the shrine. We asked the god to make them blind and kill them all. Few days after, we started hearing that some persons had headache, went blind and eventually died few hours after. Some of them turned black, no matter how fair-skinned they were before the illness.”

The 87-year-old traditional chief, who said such incident had never happened in the history of the town, informed further that all the victims were males whose ages were between 25 and 35. He said: “The government has done well on the matter by deploying medical experts, but the truth is that the matter is beyond medicals. It’s purely traditional.”

He regretted that the community had been unable to recover any of the stolen artefacts. “The victims were not able to talk when we saw some of them before they finally died. The government recorded 22 deaths, but some were buried without the knowledge of the community or the government. So, those who die are likely to be more than what was recorded,” he informed.

But one of the victims of the strange disease, who is still in the hospital, Mr. Gabriel Adegbehin, said he was not involved in the looting of any shrine. He said he was sitting at home when he discovered that he couldn’t see well again.