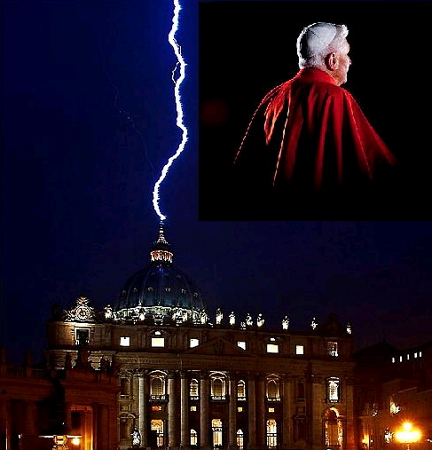 On Monday the 11th of Feb, 2013 after Roman Catholic Pope Benedict XVI resigns from his office, we learnt lighting struck St Peter’s Basilica in the Vatican City.

According to eye witnesses of this wonder of nature, the lightning strikes around 6pm.

Also called the Papal Basilica of Saint Peter in the Vatican, St. Peter’s Basilica is a Late Renaissance church located within Vatican City. Designed principally by Donato Bramante, Michelangelo, Carlo Maderno and Gian Lorenzo Bernini, St Peter’s is the most renowned work of Renaissance architecture and remains one of the largest churches in the world. While it is neither the mother church of the Roman Catholic Church nor the cathedral of the Bishop of Rome, Saint Peter’s is regarded as one of the holiest Catholic sites. It has been described as “holding a unique position in the Christian world”and as “the greatest of all churches of Christendom”

On January 30, 2013, a seagull attacked a dove of peace released by Pope Benedict XVI from his window over St. Peter’s Square in the Vatican.

Still unsure if these occurrences are mere coincidence or portend something critical.

What do you think caused the lighting?

Nigeria Has The Highest Cancer Death Rate In Africa; Over 10,000 Nigerians Are Killed By Cancer Yearly – WHO
Nigerian Journalists Arrested & Brutalised In South Africa For Covering Super Eagles Departure