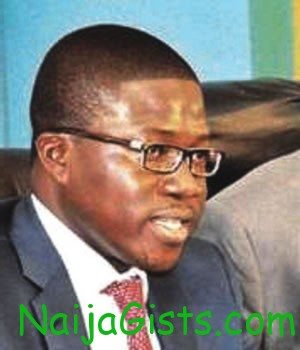 According to reliable sources, Hakeem Muri OKunola, is being touted to be the next Governor of Lagos state. The Action Congress of Nigeria Chieftain, Asiwaju Bola Ahmed Tinunbu is believed to be positioning Hakeem for the plum post. naijagists.com

Political pundits are already claiming that even with Hakeem’s young age, he may not get the blessing of those in the ACN caucus, but TInubu is determined to put Hakeem in the same manner he put Babatunde Raji Fashola as governor of Lagos state in 2007.

Meanwhile, it has now become a talk of the town in Lagos state on who the next governor will be come 2015 after the exit of the incumbent governor Babatunde Fashola. As it is, political pundits believe that the Jagabon Borgu, Bola Tinubu will prefer to use one of his boys who is now a permanent Secretary in the Ministry of Lands, Hakeem Muri Okunola, whose father was a revered Justice in the court of appeal in Lagos state before he passed on.

When Hakeem Muri Okunola graduated as a Law student in London, he served with Ibile Holdinds as company secretary. That was when Adewusi was the Managing Director, and from there Hakeem served Tinubu in his second term as his personal assistant. Shortly after Tinubu left government, Hakeem was made to become an Executive Secretary in a very posh body that guarantees good facilitations. It is now no more news that Hakeem is being prepared for the Alausa secretariat top notch office even as speculations are rife that another top ACN member is said to be in the race for the governorship post. He is Muiz Banire who now holds sway as the National Legal Adviser of the Action Congress of Nigeria, ACN.

Between Muiz Banire and Hakeem Muri Okunola, Asiwaju Bola Ahmed Tinubu may find it very hard to pick one of the two because Hakeem’s father used to be a family friend to the Tinubus and Muiz Banire is also a fraternal friend to Bola Tinubu.

Observers of the whole development however pointed at the direction of Akin Ambode, the state’s Accountant General who recently resigned his appointment. it was Akin who defended all the Tinubu’s administration expenses at the anti graft agency and that he hails from Epe confirms all speculations that he is in the race as the last joker of the political class who insist in having an indigene as next Lagos governor

As it is now, no one can say who will be the next governor of Lagos state, just as the opposition party PDP are pulling all the strings to upstage the ACN come 2015. It is indeed going to be a very good scenario because ACN as a party is well-rooted in Lagos state and the PDP is not leaving anything to chance(NOP).