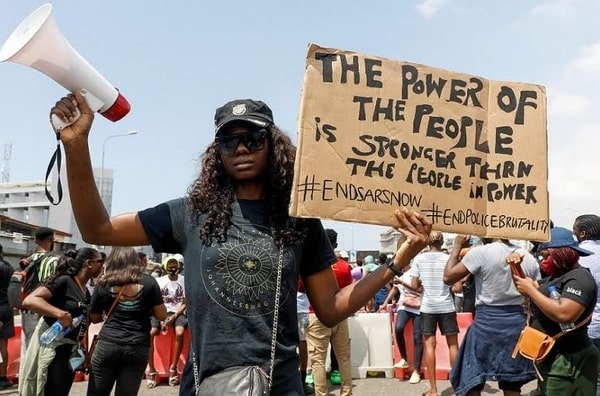 Chief Obafemi Awolowo warned our leaders many years ago when he said, “The children of the poor you failed to train will never let your children have peace”.  The events of the past few weeks have shown that there is both a wide and wild gap between the classes of youths in the nation. Sijibomi Ogundele, the youthful and vibrant CEO of Sujimoto Group said, “If your neighbor is hungry your chicken is not safe”.

During the last protest in Lagos and many other parts of the country where hoodlums took absolute charge, it became very obvious that there is a yawning gap between the social classes. It was very glaring that the various classes have opposing interests and are separated by a vast gulf of wealth and power, making class conflict inevitable. The oppression of the lower class by the people in authority will always produce the nemesis that will consume the society. Any system where injustice thrives will always produce the grave-diggers of the people in authority!

Imagine a place where we have two young protesters: Jide, who can effortlessly afford a 7-day trip to Dubai and Tony who only hawk gala daily before he can eke out a living. The pertinent question is this: who will be more tempted to loot a shop with gadgets and phone accessories in case of an uncontrollable protest? Your guess will be as good as mine.

You can’t expect the youths from Makoko and Magodo to have the same drive and priorities as the youths from Banana Island. We must all take responsibility for preparing the ground for the evolution of destructive youths from many years of neglect. There are youths that are destructive and there are youths that are builders; the earlier we realize that we need to be intentional about bridging the gap between these categories of youth, then the better we will be able to reposition their energies to build a new Nigeria.

One of the greatest revolution in history is the French revolution of 1789 which had been interpreted by several historians as a classical case of class struggle between the bourgeoisie (the elite class) and the proletariat (the struggling class). When the tension and gap between the rich and the poor is suspiciously very high, then it is just a matter of time before anger will turn to resentment and resentment metamorphose into mistrust and mistrust triggers a wild revolution! When there is already a lid on middle class ascendancy, the lower class status becomes perpetuated. When a system is inherently exploitative, it will undoubtedly and inevitably create class conflict. Karl Marx opined that this conflict would ultimately lead to a revolution in which the working and struggling class would overthrow the capitalist class and seize control of the economy.

There has never been national unity without the historical rise of the middle class and lower class, because this is significant to the evolution of civilization and the rise in living standards. We are living in a nation where the extravagance and gluttony of the wealthy is stifling the opportunities available to the middle and lower class.

Until we democratize access to opportunities, it will be very difficult for the Nigerian youths to always fight for a common cause. Looking at NNPC for example, most job opportunities there are reserved for the elites and their children. Peace will continually be elusive until we work towards bridging the yawning gap in relative to unequal access to opportunities and privileges among the various classes of the Nigerian youths. Early this year, Chairman, Senate Committee on Army, Senator Ali Ndume (APC, Borno South) decried job racketeering in federal agencies, saying such act should be criminalised. He said many poor Nigerians did not get employed in government agencies because “their own barrier is that they don’t know anybody.” He also reiterated the words of Mallam Aminu Kano by saying that Nigeria would not have peace “until the son of nobody can become somebody without knowing anybody”.

In the award winning and epic book written by George Orwell in 1945, “Animal Farm”, a group of farm animals revolt and establish their own society because they were tired of their servitude to man, only to be betrayed into worse servitude by their leaders, the pigs, whose slogan becomes: “All animals are equal, but some animals are more equal than others.” I am in no doubt that George Orwell book is truer in the situation of Nigeria presently than at any other time in the history of the nation. George Orwell, the author of the famous book once said, “The day people realize that if they are in large unified numbers they can demand anything from their government is the day the government is in big trouble; that is why they keep you divided”.

During the early days of the protest, I saw a great display of synergy, compassion, accountability, unity and resilience among the Nigerian youths. We have youths that have proven to be the most resilient, articulated, educated, detribalized, collaborative, digitally savvy, patriotic, artistically talented and most law-abiding generation of Nigerians. The way the youths organized and coordinated their protest online and schedule their meetings was far above board. The well-coordinated manner in which the youths handled donations and food distribution shows that corruption, sectionalism, ethnicity and religious bigotry all have no place in the new Nigeria. One of the things that I have been able to conclude upon for the past few days is that for Nigeria to evolve, the youths must be involved!

The youths have become unstoppable and dynamic in their approach but this movement is not foolproof from unholy interference and this is where the youths have to be very cautious and sensitive. We must never allow our good deeds to be evil-spoken of. This is the time to pray that candid prayer in our national anthem: O God of creation, direct our noble cause!

This is not old school fight, this is digital youths fighting analogue leaders in a digital age! You don’t need a soothsayer to tell you how this will end. We are living in an era where armored tank and riffles can’t keep pace with tweets and hashtags. The problem of the protest was simply because at the tail end it was hijacked by youths of the lower class who saw it as an opportunity to loot and vandalize properties. We seem to castigate this youths, but we fail to accept the responsibility that they were formed out of the great disparity between the lower and the upper class.

As a youth empowerment specialist, I want to recommend for the government both at the state and federal levels to design a skill acquisition programme that will reduce the huge gap between the classes of youths. It is not everybody that must go to school, but we must all be equipped with necessary skills that will make us a solution and not a destroyer in our communities. We can use skill acquisition as a veritable tool to bridge the yawning gap between the privileged and less privileged youths in the nation.

My candid advice to the teeming Nigerian youths is that when things are going wrong, we must not go wrong with them. Youths are agents of change and transformation and not agent of destruction. We are in a dire need of renewed thinking youths whose thought patterns are different from the generic thinking of others.  I dedicate this piece to the Nigerian youths and the lives lost during the protest. I commiserate with the hard working citizen who lost properties and means of livelihood to the invasion of hoodlums.

QUOTE OF THE WEEK: “Nothing can stand in the way of the power of millions of voices calling for change” – Barack Obama

A Country That Rehabilitates Terrorists But Shoot And Kill Peaceful Protesters. We Will Never Forget!
If You Want To Be Successful, Learn To Make More Moves And Less Announcements