June 11, 2013 – Tonto Dikeh Confirms She Fell On Stage In London, Denies Being Drunk

This past weekend at the Kukere concert in London, Nollywood actress Tonto Dikeh who co-hosts the event with singer Iyanya has confirmed she fell on stage.

When the story first broke on NaijaGists.com yesterday, several fans took to Tonto Dikeh’s Twitter page to confirm the authenticity of the story.

there is a rumour that you fell on stage,how true is it?

According to a key witness at the concert, Tonto Dikeh appeared drunk or drugged.

She said a whole lot of irrelevant things that she wouldn’t normally say on a normal day.

The actress has however debunked the allegations. 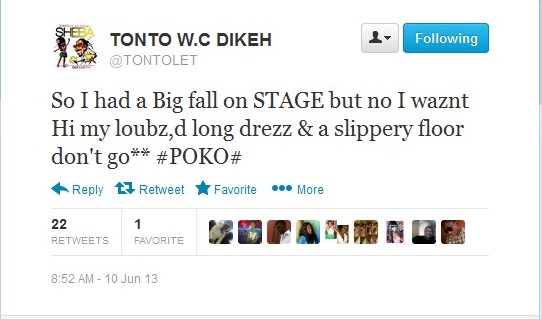 She blamed her designer high heel shoes, long dress and slippery floor on her fall.