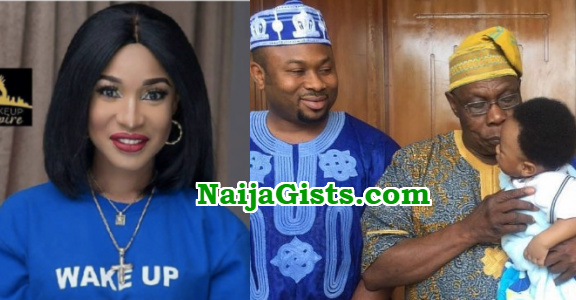 Drama Queen Tonto has for the third time in 2018 clarified his son’s relationship with former President Olusegun Obasanjo.

Tonto Dikeh who called Obasanjo her ex’s father when she was still very much in love with him has changed her words.

This comes after an IG account @celebritys_kid shared a picture of Tonto’s son, Andre sitting on Obasanjo’s lap as his father Kunle Churchill watched excitedly.

Tonto Dikeh who accused the IG account of lying with her son’s image, wrote;

“Excuse me, that’s my son and that’s not his grandfather in any way. Baba is a great man and has been wonderful to me and my son, but Unfortunately, we have no blood relationship with Baba. 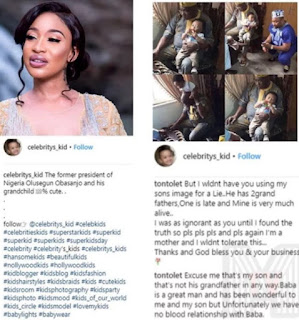 “But I wouldn’t have you using my son’s image for a Lie.. He has 2 grandfathers, One is late and Mine is very much alive.. I was as ignorant as you until I found the truth so pls pls and pls and pls again I’m a mother and I wouldn’t tolerate this.”