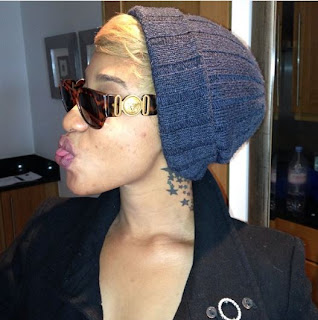 In a bid to turn down the controversy generated by her stage fall in London, Nollywood actress Tonto Dikeh who co-hosts Iyanya`s kukere concert in London is citing mosquito bites as a likely factor for her erratic behaviour on stage.

Tonto Dikeh shared the above photo of an apparent mosquito bite via her Twitter page few days ago and she captioned it with;

“Mosquitoes are biting me in London”…pauses, I can imagine the look on your face right now, the look of “

Instead of her fans to show a bit of sympathy they rather dissed her with all sorts of words;

“It’s a reaction to one of your skin care products especially the ones that bleach.”

While another said; “Mosquito in London? Sure you are not still high on ukwale Igbo that made you crash on stage!!!

She is acting unlike herself these days. It seems the stardom thing is hitting her on the bad side.

So the mosquitoes that didn’t bite her in Nigeria followed her to London to complete their mission (I no fit laugh ooo).