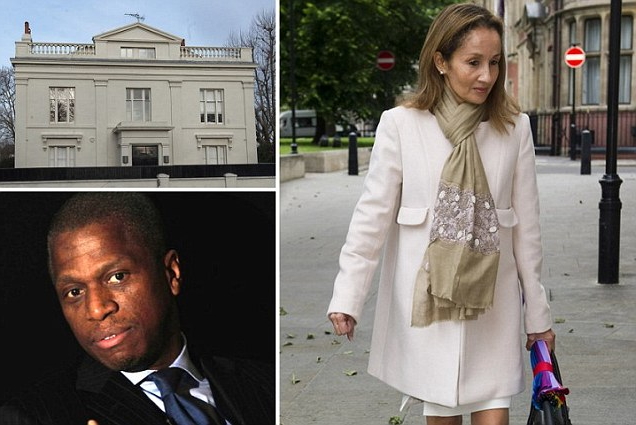 Michael Prest, a popular Nigerian oil billionaire has lost a his divorce case with his former English wife in a landmark court case over a £17.5m divorce settlement, Daily Mail online reports.

The Supreme Court ruled that properties owned by 51-year-old Michael Prest’s companies did count as his, and therefore should be counted as his assets in the high-profile divorce battle between him and ex-wife Yasmin, 50.

Lawyers say the decision, which overturned an earlier Appeal Court ruling that Mr Prest’s companies could not be taken into account when calculating the divorce payout, could have significant implications for divorcing couples.

This morning’s Supreme Court judgment, which followed a hearing in London in March, was the latest round of a lengthy legal battle between the couple, who married in 1993 and spent most of their time in their £5m matrimonial home in London’s Maida Vale.

Mrs Prest, who has four children by her ex-husband, said after the decision was announced: ‘I’m delighted and relieved that the Supreme Court has ruled as it did.‘I’m grateful to the judges for the care and thought they gave the case.  It is more a case of satisfaction and relief than celebration.

‘None of this would have been necessary if Michael had been sensible and played fair.’

In October, the Court of Appeal ruled that Mr Prest did not have to hand property worth millions of pounds to Mrs Prest.

Appeal judges concluded that a High Court judge had earlier wrongly ordered Mr Prest, who is now based in Monaco, to transfer properties held in the names of offshore companies he controlled.

Their decision came after Mr Prest claimed that the millions of pounds held in cash and property by companies he owned did not count as his assets.

Mrs Prest then asked the Supreme Court – the highest court in the UK – to analyse the case.

Judges heard that the couple, who married in 1993, spent most of their time in London, had properties in Nigeria and the Caribbean and lived to a ‘very high standard’.

They were told that Mr Prest claimed to be worth about £48m, but Mrs Prest said he was worth ‘tens if not hundreds of millions’ of pounds.

Mr Prest, who now faces having to pay an estimated £3m legal bill, was not in court to hear the judgement as seven Supreme Court justices unanimously allowed Mrs Prest’s appeal today.

Supreme Court President Lord Neuberger, and Lords Sumption, Clarke, Mance, Wilson and Walker and Lady Hale said that the companies were held in trust for the husband and became family property.

They ruled that under English law in certain circumstances the courts can ‘disregard’ and ‘pierce the corporate veil’ in order to reach the assets.

They concluded that seven properties held by Mr Prest’s Petrodel Group were properties to which he was ‘entitled’ – even if he did not own them personally –  and therefore should be counted as assets in the couple’s divorce.

However justice Lord Sumption warned that it was not possible to generalise about whether a company’s owner was always entitled to its assets.

He said: ‘Whether assets legally vested in a company are beneficially owned by its controller is a high fact-specific issue.

‘It is not possible to give general guidance.’

He said judges were sometimes entitled to ask whether ‘terms’ were really what they were said to be or ‘simply a sham’.

‘A VICTORY FOR COMMON SENSE’ – LAWYERS GIVE THEIR VIEWS ON RULING

She said: ‘The ruling confirms that, if someone is the sole owner of a company, then if the court is satisfied that those assets are held by that company on trust for one party, they can be used as part of a divorce.

‘It means that business people cannot deliberately “hide” their assets in businesses and corporate structures to protect them in future in the event of a divorce.’

Michael Hutchinson, a partner at law firm Mayer Brown, said: ‘The Supreme Court has handed down a landmark decision in which, for the first time since at least the end of the19th century, it has accepted a general exception to the rule against ‘piercing the corporate veil’.

‘This is an extraordinary decision and the implications for corporate governance are potentially huge.

‘Businesses and lawyers will be poring over the judgment for some time to try to understand its limits.’

Marilyn Stowe, a senior partner at Stowe Family Law, went on: ‘The Supreme Court’s decision is a victory for common sense.’

Source: News Of The People Magazine