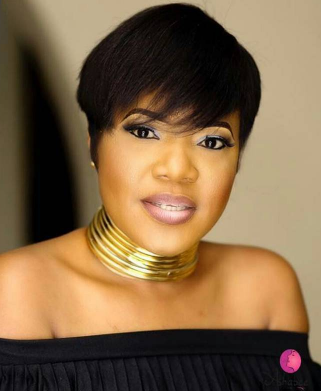 2016 to be her anus horibillis; the year where everything that could go wrong did go wrong for her.

The string of controversies started with the breakdown of her marriage to Adeniyi Johnson and her surprising involvement with Seun Egbegbe, a filmmaker that fans imagined was beneath her social standing. But as love is blind, the romance stayed alive for a while. Egbegbe was subsequently arrested for fraud- including a case of theft of iPhones at the popular Computer Village in Lagos.

She would later go on to reveal that all of these led her to depression and drug use.

However, towards the end of 2016, Toyin released a press statement to the effect that she would henceforth be going with the last name ‘Abraham’ instead of ‘Aimakhu’. She described it as a personal decision that she had the blessings of her family.

No sooner than she dropped the name did she face 2017 with new vigour. She got into the year with a new slay and confidence level.

In 2017, she was featured in a lot of hit movies like Okafor’s Law, Celebrity Marriage, Hakkunde, Mentally, Wives on Strike The Revolution, The In-laws and so on.

She even produced her first big screen movie Alakada Reloaded, a continuation of the hilarious Alakada series. Although critics would slam it as slapstick comedy, it is to Abraham’s credit that she never sold it as cerebral work of art; it was just comedy. According to reports, the movie made over 70 million naira at the box office. Not too shabby, right?

Toyin also received a lot of awards and she now one of the most sought-after actresses in Nollywood.

In Omoni Oboli’s Okafor’s Law, she exhibited a certain level of panache that is rare in her characters; showing her as a dynamic thespian.