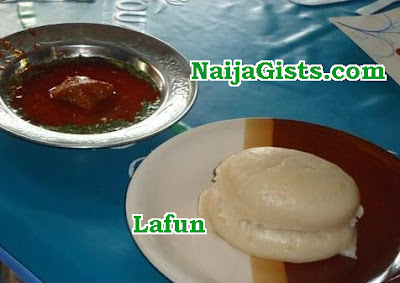 A generous female farmer at a village in Okene Kogi state died on Monday after eating a delicious Cassava flour aka Lafun meal.

The deceased was said to have brought some fresh cassava from her farm on Monday.

She reportedly used it to make the Cassava meal for her entire family. She also invited her neighbours children to partake in the meal.

Sadly, the woman and her 3 children developed severe stomach pain around midnight and died hours later.

When the neighbours sensed their sudden deaths might be due to the Lafun dinner, they quickly rushed their children to Okene General Hospital on Tuesday where they died hours later.

Kogi State Police command is treating this case as a murder suicide.