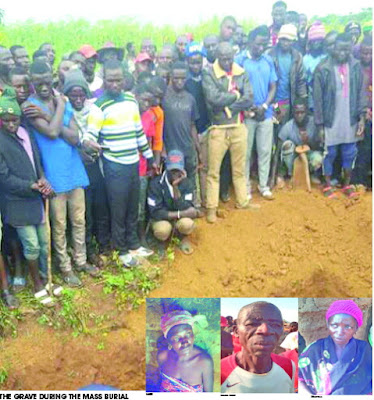 They left behind on their trails deaths, cries of woe and unending grief. Initially, there were 19 casualties comprising seven men and six women including nursing mothers and six promising children. The following day, their surviving parents and siblings watched and wailed, throwing their hands in the air and wrapping them around their lifeless bodies in utter helplessness and hopelessness as the dead were given mass burial.

Agony of a mother

But the case of 38-year-old Lami Ishaya, a mother of six, is something else. Though she survived the gory killing, right now she is a living dead, a walking corpse. Life has no meaning for her any more as eight members of her family perished in the attack.

The scenario that played out on the night of their death is one that is bound to linger for a long time to come. She recalls that the villagers were fast asleep when the harbingers of horror came calling at 1am. Bedlam was let loose everywhere. Amid the confusion that ensued following sustained bursts of gunfire from every direction of the village community, the inhabitants, rudely woken up from sleep, ran as fast as their legs could carry them, without minding lurking danger. In the process, many, especially women, and children were hacked down by the invading herdsmen who were fully armed for the operation.

Lami, who was sleeping in the same room with her two children, said she heard footsteps of the attackers approaching while she was busy trying to wake up her drowsy children so that they could escape. But she never really succeeded as the blood-thirsty assailants kicked open the door and burst into their room. Faced with imminent death, she jumped out through the window while leaving her two children behind.

But she nearly ran back when their cry of agony and shout of her name, earnestly pleading for her to rescue them, became unbearable. She broke down as she sat narrating details of the incident in which her children lost their lives in an unprovoked cold-blooded murder. She recalled how their voices got silent shortly afterward, tearing her heart and soul further apart when it became obvious that they had been killed.

Not done yet,, the attackers went into the room where her husband was sleeping with her other children and the second wife and hacked them to death. She witnessed it all. She heard their cries of agony and earnest pleas for mercy before they were eventually silenced with machete cuts. Her heart was broken many times over. But when she noticed that they were coming towards her direction, she ran farther into the bush.

“I don’t know where to start now that all I laboured for in my entire life has been taken away in one night,” she wailed uncontrollably. And, she began to wonder whether her decision to run away was even a wise one. What is she living for again? Wouldn’t it have been better to wait to be killed along with others? “It was better for me to have died than to incur these losses. How can I overcome this trauma?” Again, she began to weep.

Yet another sad one

The case of 28-year-old Martha Friday is also bound to make you cry. Her two children, Ishaya, 9, and Emmanuel, 6, visited their grandmother in August during the long school vacation, and were planning to return home on Sunday, two days before the attack, in preparation for school resumption last Monday. But the children, their grandmother and grandfather perished in the attack. Martha, who was married in a neighbouring village, is now left in deep grief. The whole thing looks like a dream to her as she is yet to come to terms with the fact that her two children are no more.

She now lives her life in total regret. “If I knew that there was going to be an attack, I wouldn’t have allowed them to visit their grandmother,” she told Saturday Sun. “At first, I contemplated stopping them, but their father encouraged me to let them go and we were planning to come and take them only for us to be called that they were among those killed.”

Seventy-four-year-old Goh Rohu was mostly devastated with the killing as he lost his wife and 15 close relatives in the attack. They include Lami’s family. His extended family was badly affected in the incident where five of his brothers, four wives and six children were killed.

“I want Federal and state governments to investigate these killings,” he said. “It was carefully planned to wipe out the entire village and my house was mostly affected. We have been living in peace for several decades and we don’t know why this calamity is coming at this time.”

He posited further: “Those who carried out the attack must be arrested and prosecuted according to the law to stop others from taking similar action on other communities. We are suspecting Fulani to have carried out the attack because they had accused the village of killing one of their sons, which is not true.”

Baba Rohu, who narrowly escaped death, added that the attackers who operated within 30 minutes without resistance divided and took position at strategic points before swooping on the villagers. Holes which bullets penetrated into some of the houses whose doors are made up of corrugated iron sheets are all too visible.

Genesis of the evil

The attack is said to be a reprisal carried out by Fulani herdsmen who had accused the Miango community of beheading their son, Abubakar Jibrial, and burying him in a shallow grave. The paramount ruler of Miango, Bra Irigwe, Rev. Ranku Aka (retired) was pained because he claimed to have called on the police to arrest the five members of the community said to have been fingered in the murder. He wondered why the Fulani would launch such a deadly attack on an innocent community.

The paramount ruler said he has forgiven those who carried out the attack, but he noted that the Fulani admitted during a meeting with the Governor of Plateau State, Simon Lalong, that there were irate youths among them. He would want them to make those youths available for arrest, just as he has done in his community for absolute peace.

He revealed that the death toll has risen to 24 from the original 19 persons given mass burial after the attack as two of the people rushed to Bingham University Teaching Hospital, Jos, could not make it, while three more bodies were later recovered in the bush.

The member representing Jos North/Bassa in the House of Representatives, Suleiman Kwande, who was in the village on condolence visit, brought relief materials to the hapless families and begged the natives and the Fulani community to sheathe their swords and embrace peace.