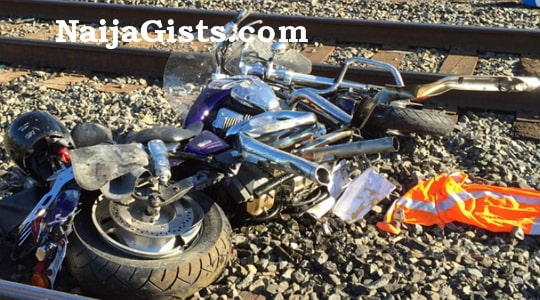 An Inspector of police identified as Philip Kolo was today crushed to death by a fast moving train.

Kolo, said to be attached to the defunct Inspector-General of Police (IG) Special Tactical Squad (STS) and his motorcyclist friend were killed on the spot while crossing the rail line at Public Works Department (PWD) bus stop along Oshodi Ikeja Expressway.

The Inspector, it was gathered, was in Lagos for investigation activities and was heading to the State Police Command from Agege for a meeting with parties to a case.

It was learnt that the debris of the motorcycle was seen at Shogunle, where the train dropped it.

According to a witness, the motorcycle wheel was close to the train’s magnet and dragged the victims towards the train, adding that they were shredded.

Another witness said the train hooted from a distance and people around warned the motorcyclist to wait at a distance for it to pass before crossing, which he objected.

Even his bag he came with from Abuja was seen at the command.