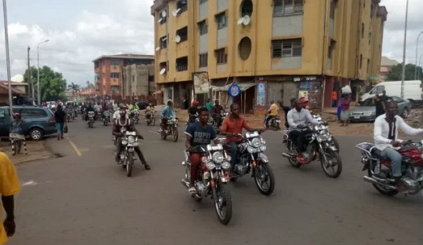 The Ebonyi State Police Command has arrested and dismissed the killer cop who shot and killed a motorcyclist in Abakaliki the Ebonyi state capital.

The Okada rider, Mr. Ofim Ejike was shot along the popular Waterworks road in Abakaliki last night by a trigger happy police Sergeant, Onyebuchi Nweke attached to the Story kidnapping squad of the command.

Reacting to the incident, Police spokesman, Loveth Odah said the suspect who was tried yesterday in his Department, Anti-Kidnapping, AK, has been summarily dismissed from the force.

He stated that such dastardly would never be condoned by the police.

Mrs Odah said that the suspect would be charged to court tomorrow (Friday) to face charges bordering on murder.

“The incident that happened is indeed an unfortunate one; we are appealing for peace and order; there is no way the police command would condone such dastardly act; if I may tell you, the suspect, Sgt. Onyebuchi Nweke was tried yesterday at the department level and was summarily dismissed from the force. He will be charged to court tomorrow”

“We are the only force or institution that washes our dirty linen in public; what happened is indeed unfortunate; if any Okada rider was arrested or his bike confisticated following the incident, as soon as there is calm, they will be released and their bike returned to them. Every strategy is aimed at bringing peace to the state capital”.

“Even as senior officers of the Command went on patrol to quell the situation, they were stoned by the Okada riders; as I am talking to you now, a police officer who was hit by stone, is now on admission at the Federal Teaching Hospital, Abakaliki”.

“He is presently battling between life and death; another officer with traffic was today beaten to stupor by the rampaging Okada riders”.

“We appeal for peace and order as no stone would be left unturned to ensure justice for the victim, Mr. Ofim Ejike whoresides at 32 Linus Ede Street, Convent Road, Abakaliki.”

Meanwhile, Abakaliki, the capital of Ebonyi is still boiling as Police on Thursday clashed with Commercial Motorcyclists popularly known as Okada riders who are protesting the killing of Mr Ofim While.

The motorcyclist was accosted by Police officers of the Anti Kidnapping squad, AK, of Ebonyi State Police Command at Anan world junction by water walks road.

A source who witnessed the incident said, the Okada rider in his 20s was carrying a female passenger when he was flagged down by the policemen, who are notorious for fleecing motorists of their hard earned money at night at the junction.

“When they stopped him, they demanded for their usual N50n but he gave them N20n and wanted to drive off when ọ we of them opened fire on him. The bullet shattered his head and he died instantly”, said the source.

The incident caused pandemonium along the road as residents along the adjourning streets gathered and attempted to lynch the officers. They also used tires to set burn fires on the road.

Continue Reading
You may also like...
Related Topics:ebonyi, police, sergeant