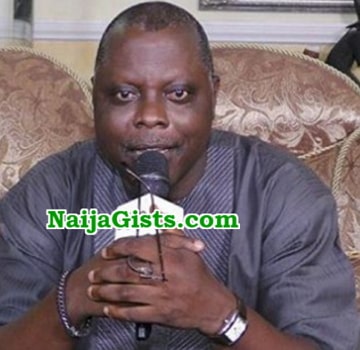 True Confession By Dele Odule: I Have Fallen Victim To Lust

In this recent interview with Dupe Ayinla Olasunkanmi, former President of TAMPAN, Theatre Arts and Motion Pictures Association of Nigeria, Dele Odule clarified some issue about his affairs with women, the multiple children he’s fathering with different women and a recently surfaced issue about his ailing colleague, Babatunde Omidina.

Why are you being challenged over Baba Suwe’s ailment?

Some of the things they said is that I am heartless. “Why would he say he sent N100,000 to Baba Suwe’? What can the amount do in the context of his sickness?” Unfortunately, most of them were addressing the issue as if what I said is not right. Several people were insulting me, including one Ogunseki and Sayo Opeyemi.

If I have a challenge, particularly in the area of health and the church, mosque or traditional association I belong to cannot rescue me, then the professional body I belong to should not be attacked. If you refuse to challenge the religious body I belong to or my family, why should you challenge my colleagues? I was just being practical.

So what is your son’s involvement in this issue?

He got involved because those who know him as my son actually asked why his father was addressing the issue of Baba Suwe the way I did. My son is not an actor. I don’t even have any of my children in that line. However, this is not the first time we are having issues with the public concerning our sick colleague. They always claim we don’t lend helping hands to one another. I don’t know where they got that impression from. There is need for us to address this form of embarrassment. That is one of the reasons I usually stay away from the media, because whatever I say will be misinterpreted. I try to stay away from controversy.

Not that I am scared of anybody, but if they remove sentiment from this issue, they would know I never said anything against him. When they said we did not contribute money towards his ailment. I merely explained that I met him in 2017 at one of our conventions, and was surprised that his sickness had worsened. I mentioned that I called my people on the need for us to do something urgently and we raised N100, 000, which he did not acknowledge.

As such, I was just trying to let you know that we did not abandon him as claimed by the public. As a matter of fact, we even went ahead to speak to a health organisation on how they can be of help to him. You can confirm this from the present president of TAMPAN, Mr. Latin. At that time, the health organisation even called Baba Suwe but unfortunately, he did not pick their calls. What people should understand is that, this sickness did not start yesterday, and we had tried in the past. It was when he needed more help that he cried out.

Is it true that the association has been taking care of him before now?

I cannot say that the association has been the one taking care of him. All I can say is that we did not abandon him. We could not continue because he has been on it for a while. If we say that, it means we have been doing the day in-day out care. And it is not possible for the association to be taking care of him for forever. We can only assist. We have done our own part; that is not to say that the part is enough. But we have to know the situation of things, before we can go further.

Having cleared the issue of Baba Suwe, let’s talk about you. How did you become an actor?

The environment I grew up attracted me to the profession. I grew up in the village and there were lots of activities in that area. Then, I had the chance of watching people do dance, drumming, and singing. So I discovered I could do all these things after leaving modern school. I saw different travel theatre groups coming and putting up almost the same performances which we were paying to watch. And I decided to go into the profession and do better.

Looks like the dancing, drumming and singing have disappeared…

Life itself is dynamic. The only thing that is constant is change. That does not mean that we should forget travelling theatre or live performances. If I have to do such now, I have to convince people, and it is more expensive. And because of technology; emergence of film production, going into live performance will not yield much money now. You will spend much on putting it together, but people would rather go to the cinemas, or go for home video, which is close to reality. For live performances, there are some things you cannot achieve on stage, and if you want to get such, you have to spend more money. So people run away from it.

How will you say the emergence of satellite TV has helped the film industry?

It could have helped a lot in Nigeria but nothing works here probably because producers are not being paid. I am not saying we are not being paid at all. But most of these content buyers are exploiters. And once you cannot get what you want, you have to be satisfied with what you get. Because even that time when you are gone, and you have a good agreement, you will get every kobo you deserve and the money will keep coming.

It was to broaden my knowledge. When you go back to school, there are somethings you will get to know more about. I am glad I did. I am happy I had the opportunity and I made use of it. Secondly, I want to eradicate illiteracy in my immediate family. Because I don’t want any of my children saying, I am just an actor and not literate. I don’t know where they got the news that I have many children, thus calling me ‘father of all nations’. All my children are educated.

What would you say to actors having extra marital affairs?

There is no occupation that does not have its challenges and peculiarities. That is the bitter truth. One of the peculiarities of people with stardom is this. I am not encouraging anybody to do that or say it is the best way of life, but majority of the entertainers will fall victim. That is because you do not know that a person somewhere has feeling for you and before you know it, you are trapped.

But are you saying there are no ways to avoid them?

There are ways. But that is because you are not in this occupation. All these ladies you see, it is not as if they do not want to have husbands. And there is no way they can detect who has a genuine intention among these people. Some of them are on the look out to get down with some of these ladies because they are popular; immediately they sleep with them, they walk away. But these ladies would have believed that they have come across their own husband. These ladies are not wayward, but they are only out to satisfy their curiosity. Being popular is one of the disadvantages because most of them do not know that they are being used. Some would even flaunt their wealth before these ladies. I really pity most of them. I am not a reverend father; even reverend fathers fall victim.

Are your children under the same roof?

Yes, ask anybody, they will tell you that.

So how do you manage all these women?

I have only one wife. I have been married to just one woman all my life. I don’t know where people get their information from. But I will not reject any child of mine and they will be under my roof. What makes me different is that I will not hide away my inadequacies; that I have fallen victim of lust. I know I have done it. There is no way I will pretend that I have not engaged in such act. I am a very upright person.

But how do you determine the paternity of these children?

If tomorrow, any of the women comes out and say the child is not mine, I will gladly say goodbye. How do I determine the one that I actually got married to? Or have we not seen the case of being married and the children not yours? I cannot be doing DNA for every child. You see, I have zeroed my mind on some things. Those that are not mine and I am taking care of, I know them. I cannot just be saying all these on social media that I am sponsoring some children in schools and paying their fees every term. I also know some elders in the industry that when you call them and ask ‘who is Dele Odule? They will tell you ‘He is a fantastic and good guy. I know some that I am obliged to, that I do things for in my own little way till date. I don’t need to flaunt all these. So if a woman had said in the past that a child is mine and I have educated such child and she comes back today and says the child is no longer mine, I will bid her farewell. But I tell you today that I have never in my life married two wives. They say I have used women to adorn my home, that I have 10 children from 10 different women, where did they get those facts? And out of these 10 children; I have twins. I have less than 10 children and they call me ‘father of all nations’.

What do you dislike about being a public figure?

My privacy. If I have opportunity of coming back to life, I do not want to be a public figure. I just want to be a comfortable person; I don’t want to come into acting. I don’t pray to be in that system again. Sometimes I will just exclaim and say it is true I had something with this girl. And if I cannot fight it, I will just say bring the child. Or do people think that I just accept them as they are giving birth to those children?

Who takes care of these children?

I do. I play the role of the father and mother. I have five graduates and some working on their masters programme. The other ones are in boarding schools. They come home during the holidays. I take them to school and pick them up on holidays. When they are back, they come into my room, we talk, and play and we have cordial relationship. You cannot know they are not from the same mother because I never allow that.