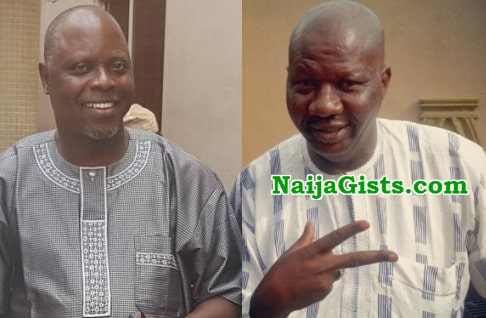 Dele Odule: Baba Suwe Refuses To Acknowledge The N100K TAMPAN Sent To Him

The former president of Theatre Arts and Motions Pictures Association of Nigeria (TAMPAN), Dele Odule has debunked the allegations that ailing actor Baba Suwe was abandoned by his colleagues.

In a chat with The Nation, Odule claimed that he had no personal grudge against the ailing actor said that in spite of odds, TAMPAN, under his leadership, had sent a donation of N100, 000 to Baba Suwe when his sickness was earlier announced, a contribution he said the actor did not acknowledge.

He said it was quite painful that colleagues and association are being accused of not reaching out to the ailing comedian.

“I have read a lot of things being said about us and to be sincere, it is not good. The little that people can do, they have done. They ask too much from artistes. We are human being too. There are lots of other professional bodies that have members going through the same situation and they are not called out. So why is it always the case with us?

“Another question people need to ask if the person belongs to the association that is being accused of ignoring their responsibility. Is the person paying his dues too? What has the person done for the association? Last year, I saw him at our convention and I was surprised at his condition; I did not know it has worsened. I later sent N100, 000 to him on behalf of the association. And he did not even acknowledge that he received the money”.

On why it is important that members get involved actively in association matters, Odule used himself as an example:

“In 2015, when I came in as the President of TAMPAN, we needed to go to Abuja for a meeting and there was no fund yet, I had to sell my 504 Peugeot to raise the flight ticket to be able to meet the deadline given to us. And after the meeting, we were given money and I was refunded for the five tickets I paid for. But if we were not given money too, it wouldn’t have been a gesture too much to be made for the association as a leader. So if I have a challenge today, and the association looks back and see what I have done, they can decide if I deserve something in return.”

He urged the public to desist from sentiment and face the fact of the matter, adding that, apart from colleagues and association, Baba Suwe belongs to some religious organisations, and has family members who are also responsible to the actor.

“If there was a provision of such in the association’s constitution, and it is not extended to him, then we can have a case. It is purely sentiment when people say he has been abandoned. He was never abandoned. One thing we should know is that Baba Suwe has an immediate family; he also belongs to one of the religious organisations, so why is it that it is his colleagues that should be responsible for his case? Have they reached out to these two; his family and religion body?” he asked.

He noted a similar allegation was levelled against the association when Moji Olaiya died few years back.

“It was also the case with Moji Olaiya, so much was said about her too when she passed away, and the association did not have money to arrange for her remains to be brought back to Nigeria. They accused us, saying we all drive big cars. Don’t we have right to that after working hard?”

Asked how well the ailing actor was being paid for his acting services, he said:

“Baba Suwe started travelling abroad in 1997. He built his house 20 years ago, and started using car about 30 years ago.

It is only a person that is comfortable that can do all of these things.

This is his own trying period and we can only pray that it passes by, everyone goes through it in life.”