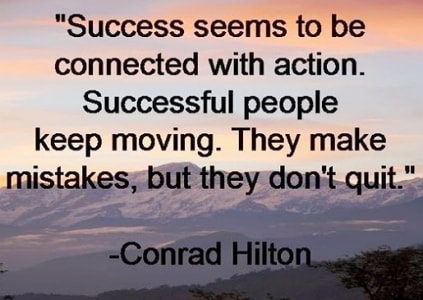 Have you ever looked around and seen people that seem less intelligent, less talented, less honest, less… well at maybe everything but they seem to be more successful than you are?

That the speed they are obtaining success seems faster than yours?

Why does that happen?

Here’s your first hint – it has NOTHING to do with “fairness”. There’s no such thing as fair and even if there was, YOU can’t do anything about that so let’s move on to something that you CAN control…

There’s a great scene in the re-done version of the Karate Kid where the mentor (played by Jackie Chan) tells his protégé (played by Jaden Smith) “Your focus needs more focus!”

If you haven’t seen it, that scene alone is worth watching the movie for.

While the scene is funny, the master is teaching the student that his FOCUS is the most critical thing he can do for his success in karate.

Because success ALWAYS stems from focus.

Think of it this way…

Malcolm Gladwell, international known bestseller of many books popularized it but it’s been around for a while.

The idea is that to get to a high level of success in anything takes 10,000 hours.

Bill Gates had a jump start in computers when he was young because he’d sneak out at night to grab computer time at the university nearby when the professors and staff weren’t using them. So by the time he’d graduated high school he was already well on his way to 10,000 hours.

By the way, Bill Gates didn’t spread his time around by being the high school class president, captain of the football team and championship chess player all at the same time. He focused.

People talk about “passion” a lot too as a key to success right?

It’s because passionate people are focused, and that leads to success.

When you look at successful people, REALLY look, they are focused on just a few things, maybe even ONE thing that they get REALLY, REALLY good at.

They rise to the top of their market. They get known for being good at that ONE thing.

Now here’s the catch… (you knew there was going to be one right?)

In the “real world” there’s always a wide variety of things that need to get done to succeed. You know this, I know this. So it’s hard to focus when there’s just SO MUCH that has to be done.

You’ve got a zillion things to do in your business, not to mention your family life, your home, and everything else.

You Only Have 24 Hours in a Day

But then again, everyone on the planet also has only 24 hours a day. So super successful, super wealthy, super influential people also only have 24 hours in a day.

How do they do it then?

By focusing on what the most important things are. Period. Even to the point of being ruthless about it.

Top speakers, experts and authors are NOT wasting their time building their own websites. They’re busy crafting and polishing their content.

Top marketers are NOT wasting their time making all the “techie” stuff work, they’re focused on marketing.

I remember one conversation I had a couple of years ago about a guy who made money selling websites. He spent two years of his life becoming an expert in WordPress – and he squeezed a little time in here and there doing his marketing, getting clients, etc. When did things really take off for him?

When he realized that he was NOT focusing on what was important- getting exposure for his business and getting paying clients.

You know what he told me?

That if he had to do it all over again, he’d spend two WEEKS learning the basics, then spend the next two years focusing on what was actually important.

Because there are a TON of people who are happy to do the “little things” for you. An entire WORLD of people, thanks to the power of the internet today.

The One Question to Answer Right Now

How much time do you spend on an average day doing what’s REALLY important?

Go ahead, make a guess. You’re probably pretty close to being right.

Now think about how fast you’ve been progressing towards the level of success you want.

REALLY think about this – don’t just skim over this part because it’s unpleasant. Seriously – How fast have you been reaching a high level of success?

So, now knowing that the time spent focused on the important things controls the rate of speed of your success…

What if you doubled the time you spend on an average day on important things?

The speed of your success would also double.

And that is the secret of why that other guy who’s nowhere near as good as you are is more successful.

They’ve been focusing more on what’s important. Maybe getting more exposure for their business. Or landing more clients or getting published more or whatever else that is making them successful.

So then the ONE question you should be asking yourself right now, is “How do I get more time to focus on what’s important?”

Sure, you could do what some experts suggest – wake up an hour earlier, or stay up an hour later. If that works for you, great. For me, I’d just burn out faster.

Or you can start getting some of those little things off your plate, and leaving more of the 24 hours that everyone has for you to use for more important things.

Of course, you don’t have to take my word for it. Look around at the top people in your field. The people who have the level of success you would like to have.

And then ask yourself – are they doing all the “little stuff” themselves?

Of course not, because no one at a high level can.

Most people think they have a team of people handling the little stuff because they’re successful.

It’s just the opposite – they have a team to free them up for what’s really important so that they CAN be successful.

Read those two lines again if you need to. I realize it’s completely opposite of what most people think.

Then remember, most people don’t succeed.

Most people struggle along thinking that all these little things need to be done, and worse that they have to do by themselves. And after they’ve gotten successful they can bring on other people to help them like it’s a luxury item that they are spoiling themselves with.

See you at the top.

Ric Thompson is a visionary, and unrepentant parallel entrepreneur whose 12+ year career has secured his spot as one of today’s top “behind the scenes” industry giants.