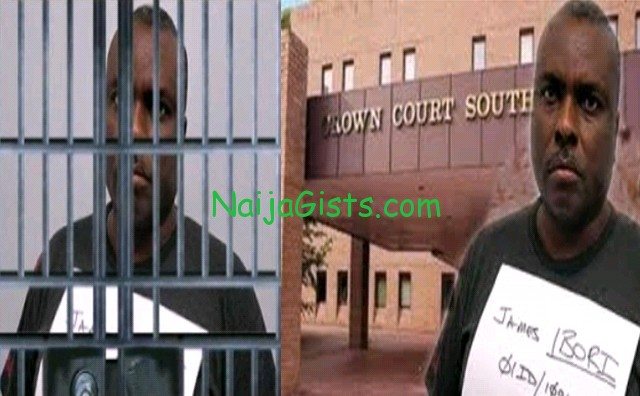 It’s a classic case of birds of a feather flocking together.

From a UK jail, where he is doing time for corruption, came birthday greetings from former Delta State governor, James Ibori to disgraced ex-governor of Bayelsa State, Diepreye Alamieyeseigha.

Alamieyeseigha, who was governor in Bayelsa from 29 May 1999 to 9 December 2005, and was convicted for corruption, clock 60 years today.

In a congratulory advertorial he took out in the Vanguard edition of today 16 November, Ibori showered effusive praises on Alamieyeseigha, who he described as the “Governor-General of The Ijaw Nation”.

In the birthday message signed by him, Ibori wrote: “My brother, please accept my hearty congratulations to you as you turn 60 today

“I join your numerous well-wishers to thank the good God who has kept you alive despite the vicissitudes of life – the lies and ill-treatment – that came your way just because of crass debilitating politics,” wrote Ibori.

The subdued former Delta strongman continued his adoration of Alamieyeseigha: “Yet, I know that you will take solace in the fact that the people of the Ijaw nation, whose cause you championed ever so lustily, have never forgotten what you stood for and the dangers you embraced while fighting for their higher good and fiscal federalism for Nigeria.”

Ibori added: “One day the right questions will be asked, the right answers buried deep in heaps of lies will be unhearted and Nigeria’s contemporary history, in which you starred, will be better appreciated and events put in their true perspective.”

Ibori is currently serving a concurrent 13-year jail term in a UK jail, after his conviction by a Southwark Crown Court, on 17 April this year, for money laundering offences.

The celebrant, Alamieyeseigha, also earlier bagged prison sentences, after admitting to pilfering his state’s funds. His predicament began in September 2005, when he was detained in London on charges of money laundering.

When the London Metropolitan Police searched his London home, they found about £1m in cash. A further search by the Met yielded a total of £1.8m in cash and bank accounts.

Alamieyeseigha, who was also found to own an estimated £10m worth of real estate in London, later jumped bail in the UK in December 2005, by allegedly disguising himself as a woman, though he later denied the claim.

But the ex-governor of Bayelsa was eventually jailed in Nigeria on 26 July, 2007, after he pleaded guilty to six counts of corruption, in a plea-bargaining deal.

He was sentenced to two years in prison on each count, but, because the sentences were to run concurrently, and the almost two years he earlier spent in detention while standing trial were deducted, Alamieyeseigha walked out of prison a free man a day after his conviction.

The ex-convict’s assets, including four luxury UK properties, one of them which he bought for about £1.7m cash in one day, were ordered to be forfeited to the Bayelsa State government.

Also on 28 June this year, the United States Department of Justice executed an asset forfeiture order on the sum of $401,931 in a Massachusetts brokerage fund, traceable to Alamieyeseigha.

Alams, as he is otherwise known, is now back in the scheme of things, hobnobbing with Presidency top shots, especially President Goodluck Jonathan his kinsman and former deputy while he was governor, who is believed to have rehabilitated him. (Credit: PM)